25 years ago on this day, former West German chancellor Willy Brandt died. He had lived a remarkable life that spanned most of the 20th century – and his biography can almost be read as a history of the 20th century in the industrialized world. This article will shine some light on Brandt’s life in the age of extremes and then discuss his foreign policy from the perspective of board games.

He was born in 1913 under the name of Herbert Frahm, became politically active as a pre-teen and joined the Social Democratic Party (SPD) at age 16. Out of disappointment over the party’s moderate stance he left again it only one year later. After the Nazis took power, he emigrated to Norway, where he adopted the nom de guerre Willy Brandt. The following years he worked in journalism and to further social democracy in Europe – both rather dangerous professions in the 1930s. Brandt made trips to Nazi Germany pretending he was a Norwegian[1] to get in touch with what was left of the social democratic movement, always in danger of being recognized and arrested. He reported on the Spanish Civil War and left Barcelona just a day before the socialist POUM party he sympathized with was prohibited and its members arrested by the Soviet-backed Spanish communists. When Nazi Germany occupied Norway in 1940, Brandt actually was arrested, but thought to be Norwegian and released again.

After the war was over, Brandt returned to Germany. He was elected a member of the federal parliament of West Germany as well as the state parliament of West Berlin. In 1957, he was elected mayor of West Berlin and led the city through two of its deepest crises. In 1958, Soviet First Secretary Khrushchev threatened to blockade West Berlin again, if it was not turned into a “Free City” unaligned to West Germany, and in 1961 East Germany made the division of the city permanent by building the Berlin Wall. Brandt remained firm in both instances. West Berlin remained free and aligned to the West, and its spirit was not broken by the division. In turn, Brandt’s political standing increased and he became one of the leading West German politicians.

In 1961 and 1965, he ran unsuccessfully for the chancellorship of West Germany. The election campaigns drained him, especially since his political opponents extensively attacked him because of his origins (he was born out of wedlock) and his emigration during the Nazi period (whereas others who had served the Nazis were left alone). A new opportunity for him to make the leap to the federal level of government arose in 1966, when the Christian Democrat/Free Democrat government broke down. Brandt became foreign minister in a Christian Democrat/Social Democrat coalition. Three years later, he ran again for chancellor and was elected this time – as the first chancellor of West Germany not from the Christian Democratic Party.

Domestically, Brandt increased both individual liberties and spending on various forms of welfare (unemployment assistance, pensions, health care). The latter proved costly in the economically less fortuitous years after the Oil Crisis of 1973. In matters of foreign policy, Brandt continued with his idea of Ostpolitik (East policy) that he had already pursued as foreign minister. The core idea of Ostpolitik was Wandel durch Annäherung (“change through rapprochement”) with the East, so Brandt  worked to normalize the strained relations with the states in Central and Eastern Europe whose leaders and populations still vividly remembered Nazi Germany’s atrocities on their territories. Brandt’s authenticity as somebody who had fled Nazi persecution himself helped him in negotiating the contracts with the Soviet Union, Poland, East Germany and Czechoslovakia. Ostpolitik, however, was highly controversial in West Germany, especially since it included abandoning any claims to the formerly German territories lost after the war. A few members of parliament in Brandt’s governing coalition defected to the opposition because of it, and Brandt lost his majority in parliament. However, the opposition failed in ousting Brandt with their newly achieved majority (it is likely that some of the members of parliament were bribed in the decisive vote). In the following elections, Brandt’s Social Democrats won resoundingly. Ostpolitik remained a cornerstone of the West German foreign policy and was not reversed when the Christian Democrats took power again in 1982. 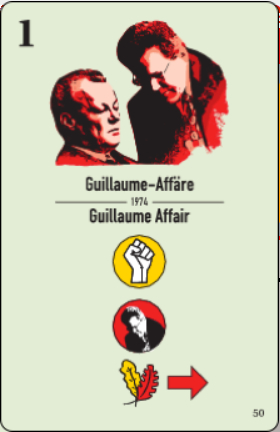 Brandt had given up his chancellorship many years before that already. The economic crisis after the oil shock of 1973 had increased internal opposition against him within the Social Democrats and the unions. When Günter Guillaume, one of his aides, was revealed to be an East German spy in 1974, Brandt resigned. He was succeeded as chancellor by finance minister Helmut Schmidt. However, Brandt remained chairman of the Social Democratic Party and became president of the Socialist International. When the East German system crumbled in 1989, Brandt became a vocal advocate for a quick reunification between the German states that was achieved in 1990. Brandt’s policies of negotiations with the East had laid the fundament for East Germany’s peaceful transition from communism. He died two years after the reunification.

Ostpolitik in Board Games

Twilight Struggle’s take on Brandt and Ostpolitik is that they only helped the USSR (which gains influence in West Germany and a victory point). From the superpower perspective, this is understandable: While Brandt did not question the alliance with the United States, he certainly was more complicated to deal with than previous West German chancellors.[2] Also, the recognition of the post-war borders took some worries about her security away from the Soviet Union, for which the trauma of the German attack was still fresh. While US president Nixon and his national security advisor Henry Kissinger engaged in similar negotiations of détente with the Soviet Union (and therefore had no grounds to complain about Brandt’s policies as such), Brandt’s independence gave the Soviets some space for maneuvering they might not have had if the United States alone had dominated the détente process. On a more abstract level, Nixon and Kissinger feared that West German-Soviet détente might lead to reunified, neutral Germany outside of the US sphere of influence. Seen through the lens of bipolar superpower competition, every deviation from the USA within the West was an opportunity for the Soviet Union.

Of course, from a West German perspective, things look different. In Wir sind das Volk!, Brandt’s Ostpolitik is captured in one card referring to his kneeling at the memorial of the Warsaw Ghetto Uprising, which was widely seen as a gesture of asking forgiveness for the Nazi atrocities (which Brandt personally had fled from). The card effect majorly increases West German prestige at the expense of some unrest in West Germany (due to the domestic opposition to Ostpolitik). Certainly, Brandt’s new policies improved the country’s international standing (and led to him being awarded the Nobel Peace Prize in 1971). This increased prestige helps, of course, with the wider West German goal in the game – achieving reunification (on West German terms), just like Ostpolitik eased the way for reunification in history. Arguably, the failure to achieve reunification via the unambiguous alignment with the West in the years after World War II was the root of Ostpolitik in the first place. However, West Germany was not the only player in the intra-German game of Ostpolitik. The East Germans had goals of their own. They hoped to achieve recognition as a state as well as easier access to Western capital with agreements.[3] So, from this intra-German perspective the benefits of Ostpolitik for the individual German states are as clear as was the Soviet opportunity from the superpower perspective before.

How can the two perspectives be reconciliated? Including all involved powers as playable states seems like a good start. The 2+2 expansion for Wir sind das Volk! does precisely that, adding the two superpowers to the two German states in a game of limited cooperation. For a superpower to win, their German ally must win over the other German state and be themselves stronger than the opposing superpower. Conversely, a German state wins if they win over the other German state but the opposing superpower is stronger than their superpower ally (to gain the status of a fully independent power). Got that? Let’s make an example: West Germany wins, if she beats East Germany and the Soviet Union is stronger than the United States. This gives incentives to pursue a policy from which your superpower ally might not benefit (like the West German Ostpolitik) – but if there is too much infighting between German state and allied superpower, they will not be able to stand up to the other side and none of them will win. It is certainly an intriguing concept, and I’m looking forward to trying it out. Wir sind das Volk! – 2+2 will be released at the Essen board game fair this year (Oct 26—29).

Board games mentioned in this article

If you prefer a history of the 20th century that is not a biography, I recommend Hobsbawm, Eric: Age of Extremes. The Short Twentieth Century 1914—1991, Joseph, London 1994.

1. To be precise, Brandt adopted the identity of his girlfriend’s husband, who had married her to secure a Norwegian visa for her.

2. This was not only a function of Brandt’s policies and beliefs, but also of the strengthened position of West Germany.

3. The reliance on Western capital massively increased the Eastern European states’ debts and would contribute to their economic woes and eventual downfall in 1989.

3 thoughts on “Willy Brandt and Ostpolitik”