Ladies and gentlemen,
One word has turned from a quiet buzzing to a noisy storm over the past weeks in the board gaming word… and, as always this time of the year, it’s ESSEN! The world’s biggest board game fair, the SPIEL in Essen/Germany is upon us. On Oct 26, less than two weeks from now, the gates will open and the merriment commence. I will be among the lucky ones who can go and am appropriately excited for it! So, here’s my list of board games I look forward to most as well as some general thoughts about attending a game fair in an affordable way.

Boardgamegeek.com has provided us with a handy little list of the 900+ games that will be released at the fair. Now, neither does my schedule does allow for checking out a few hundred games, nor do I wish to play just anything placed in front of me. So, I prepared a list of my own that does only contain the most intriguing games.
My most important criterion that the games took their (historical) theme seriously while being accessible enough for a wide audience. Negatively phrased: I aimed to avoid both games with an arbitrary theme (or no theme at all) and games that have a level of complexity or game time that goes beyond most gamers’ patience. So, if you are looking for abstract games or detailed simulations, this list might not be for you. Bonus points were given to fresh approaches to setting and theme as well as to games by designers who have already convinced me of their abilities with their previous games. Without further ado, here’s the list of Clio’s Board Games’ most anticipated games of Essen 2017 (sorted by hall at the game fair):

This is an expansion for Wir sind das Volk! that lets you add the superpowers USA and Soviet Union to aid their respective German allies in their Cold War rivalry – but also to engage in their own struggles of the arms race, space flight and global dominance. It’s an expansion, and it’s strictly for four players, both of which limits its appeal. A strong point for 2+2 is the meticulous care to transfer history not only into the theme, but also the mechanics. Each superpower is allied with a German state, but with only one winner in the end, players need not only look after their side’s interests, but also their own. All sides should play very differently from each other, and the various sub-systems are highly interdependent (see this little chart BGG user quertymartin created for the base game and mentally add some more factors). I expect a multi-dimensional puzzle where each action presents a tough choice.

John Company lets you control the fates of wealthy British merchant families who try to gain fortunes, influential positions and a comfortable retirement through commercial activity in (and outside of) the British East India company. The players run the company together, but in the end, they are beholden to their own interests – which can be very much at odds with those of the company. One of the most interesting points of the game is that it takes the social reality of the period into account: The class of British gentlemen involved in the company is small enough to make “promises” an enforceable and tradeable commodity and money has its worth both for capitalist ventures and buying retirement homes in England in the style of a rent economy. 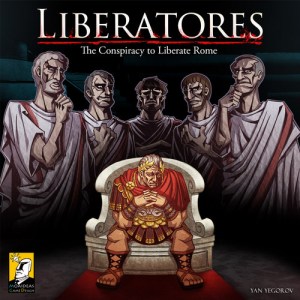 Secret identity games are always fun. You want to live your quiet life, but some people in your village are mafiosi (or werewolves). Turns out that this time you indeed don’t want to live your quiet life, but instead overthrow Caesar and restore the Republican tradition in Rome. And some people in Rome either don’t want that because their Caesar’s agents or do really want to overthrow Caesar too, but with the goal of making themselves ruler of Rome. That all players rely on Caesar for their funding makes identities even shadier and actions even more ambiguous. Whose interests align with yours, and who can you trust? While the mechanisms of this game are certainly no precise rendering of actual Roman politics, it looks like it captures the spirit of uncertainty as well as the struggle between individual and group needs so characteristic of the Late Roman Republic.

While this was already published as print-on-demand last year, it will now be released by a commercial publisher, so I included it in the list of new releases. Democracy under Siege contains many of the staples of heavier historical games: a big map, many cards and counters, you name it. What makes it intriguing, however, is where it veers from these staples: The game is set in the 1930s beginning with the Nazis taking power in Germany instead of the more common WW II. War is not the focus of the game, and the outbreak of a total war will in fact end it. Players do not control countries, but rather ideologies. Lastly, the struggle is three-sided with democracy, nazism and communism fighting for hegemony.

When it comes to board games (and most other things), my buying philosophy is that less is often more. For me, it’s about making good use of the games I have, not about filling my shelf. Therefore, I don’t know if I will buy some or any of the games mentioned (as well as any others). I think that is one of the very great things about an event like the Essen game fair: You can try out a lot of different games, shiny and new, and if one of them wins your heart, you buy it. And for all the other games you just had a (hopefully) good time and the experience to have played it.
However, I am very much aware that going to the fair is already quite an investment – not so much for the tickets (13€ for a day ticket, 31€ for the entire weekend), but for travel and accommodation. Depending on your travel distance, spending hundreds and thousands on a weekend of intense board gaming might seem like a bit too much of financial commitment (not to speak of the vacation days you must take to even be able to go there). Going to such an event is very much a privilege, and by no means required for being a board gamer (no matter how much the Essen buzz on blogs and Twitter might suggest otherwise). Also, the experience of board game fair and convention can be had just as well at a smaller event. (You can’t check out everything at Essen anyway. Not even everything that really interests you.) For most of my board gaming life, I attended only the small local fair about an hour away from my home town, and that was always a great experience, even if they didn’t have 900 games being released there. Many places have board game fairs and conventions nowadays, so make sure to check out if there is something close to you!
Since we’re speaking about money already: Is board gaming an affordable hobby? Can board gaming be an affordable hobby? How can board gaming be an affordable hobby? I will talk a bit more about that a week from now on this blog. Stay tuned.