The ancient history professor Alexander Demandt has enumerated 210 theories why the Western Roman Empire had fallen that had been proposed in the 1500 years since the Empire’s collapse. They ranged from the abolition of the gods to vulgarization and everything in between – fighting multi-front wars, excesses, lead poisoning, decline of the “Nordic character” of the Romans, female empowerment, you name it.[1] While the Roman Empire is gone for a bit longer than the Soviet Empire, the number of explanations for the sudden end of the Cold War and the fall of Communism in Eastern Europe are almost as manifold as those for the fall of Rome. That speaks of the surprise that the collapse of Communism was, and never was this process faster or more dramatic than in the year 1989. This article will look at the first group of explanations for the collapse of Communism and how they are represented in the board game 1989 (GMT Games, Ted Torgerson/Jason Matthews), kicking off a series on how history, politics and culture intertwine in 1989.

Since there are so many explanations, it is useful to look at them as belonging to groups. One way to group them is to ask the question “Who brought down Communist rule over Eastern Europe?” Answering this question reveals to whom the explanations assign the principal agency. For this first post, let’s look at the explanations that propose that the peoples of Eastern Europe were driving force behind the change. There is something intuitive to that – in every country of the Eastern Bloc, thousands and millions of ordinary people took to the streets and demanded change. 1989 acts on that and merges all these various groups and individuals who took a stand against their governments into one of the two players – labelled the Democrat. The peoples of Eastern Europe were however not driven by the longing for democracy alone. There were three major demands, namely that for human rights (including those to political action), that for traditional non-communist values and that for consumer goods and Western popular culture.[2] We’ll have a look at each of those.

Of course, there had always been demand for political change in the Eastern Bloc. Various uprisings had flared up because of it. The Soviet Union had quelled three of those uprisings with tanks (East Germany 1953, Hungary 1956 and Czechoslovakia 1968). On a smaller scale, individual dissidents had been imprisoned in every Eastern Bloc country – sometimes fewer of them, if the government saw dissent as a safety valve to prevent disobedience and insurrection, sometimes more, if the government regarded the dissent as a dangerous attack on the system.[3] A seemingly innocuous event in 1975, however, would turn out to give the dissidents a degree of legitimacy unforeseen by their governments: The Helsinki Final Act, a major agreement of détente between the United States, the Soviet Union, and the countries of Europe contained a small section on how the states would ensure their citizens’ human rights. The Communist countries had regarded this as mere lip service – “We are masters in our own house”, Soviet Foreign Secretary Gromyko had assured his colleagues – but the many “Helsinki groups” springing up like mushrooms everywhere in Eastern Europe proved him wrong. Since the Communist governments were officially committed to the principles of human rights as outlined in the Helsinki Final Act, they could not crack down on those groups like they would have before, but they also were less than delighted by their activism. This is the dilemma the Communist player in 1989 faces as well after “Helsinki Final Act” has been played – either she bites the bullet and takes the VP loss, or she lets the Democrats run wild on uncontested student and intellectual spaces. 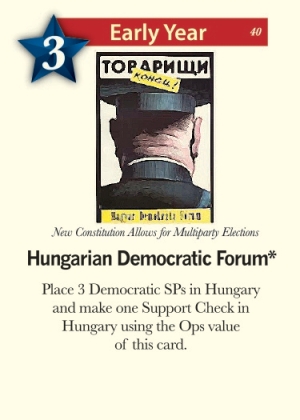 The opposition groups did not name themselves a “party” to avoid repression – here, “forum” is the term chosen instead. Image: Card Hungarian Democratic Forum, ©GMT Games.

The demands for political participation were also shrouded in the language of Helsinki. The dissidents needed to avoid everything that might let them look like a rival to their Communist party and instead presented themselves as groups ready to help the government and engage in dialogue with them. When they grew bolder and claimed roles for themselves that the Communist governments were not willing to share (like the Polish Solidarity being an independent trade union and thereby challenging the view that the Communist regime took the best possible care of its workers), fiercer struggles took place.

Not all dissidents were driven by the wish for political freedom. Others opposed Communist rule because it was at odds with their traditions and values – namely, their nationalism and their faith. While the practice of religion had been suppressed most of the time in Communist countries, it was never extinguished. In 1989, the churches of some countries (most notably, Poland) act as a solid anchor for anti-regime activism that is almost impossible to flip to the Communist side.

There was a more ambiguous relationship between the Communist regimes and nationalism. Communism is an internationalist ideology, stressing common interests based on class, not on nation, but the regimes often tried to gather support by harnessing nationalism. While they had some success with it, they never fully succeeded in identifying their government with the nation. What remained fully at the fringes, however, was the nationalism of the ethnic minorities. Marginalized by the majority nationalism the Communist state embraced, they set out to combat both. Nationalism, just like religion, was a rallying point of dissent – and as such possibly even more important than the demand for democracy and liberty. 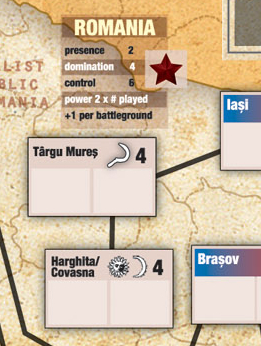 The Hungarian minority in Romania (Harghita/Covasna) is not very well connected, but can serve as a starting point of dissent. Image: Detail of mapboard, ©GMT Games. 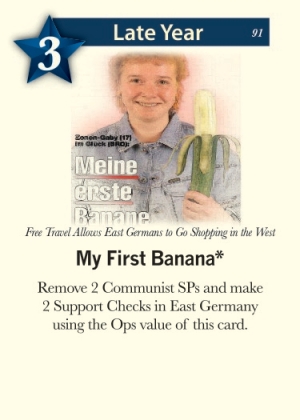 The card depicts the cover of a West German satirical magazin poking fun at East Germans’ lack of tropical fruit before the fall of the Wall, which allegedly led to them highly valuing bananas (while not being able to recognize them). Image: Card My First Banana, ©GMT Games.

The competition between East and West was not only waged with high politics and grand ideas, though. Many people’s concerns were much more down-to-earth, and this is an area where 1989’s attention to detail really shines. As in any other place, the people of Eastern Europe aspired to have consumer goods – from the basic wish to eat tropical fruit every once in a while to the dream of owning a car. These urges were especially strong among those who had personal experience with the much more affluent societies of the West, like many people in East Germany. From the 1970s on, the Communist regimes had increasingly relied on consumption to ensure the allegiance of their populations, but they still lagged far behind the West in terms of personal wealth. After the collapse of Communism, the Eastern Europeans rapidly adopted Western-style consumption, but still were the objects of Western mockery for their perceived provinciality and backwardness – like poor “Zonen-Gabi” on the card “My first banana” who has been deceived about exotic fruit. 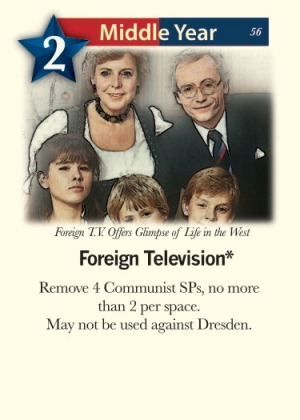 Western TV’s focus on well-to-do families painted a brighter picture of the West than overt propaganda could ever have. Image: card Foreign Television, ©GMT Games.

The most potent ambassador for the West as the land of freedom and affluence was Western popular culture. Western music records were widely shared (despite being illegal in many Communist countries) and many Eastern Europeans could also tune in to Western radio and TV channels who placed very strong broadcasting stations close to the border. Millions of people learned English so they could listen to Radio Free Europe or the BBC. While East and West Germany were divided by a wall, no language barrier kept East Germans from watching West German TV on an almost universal level – except for the area around Dresden, the “Valley of Know-Nothings” which was out of reach for the Western stations. Accordingly, it is impossible to use “Foreign Television” on Dresden in the game.

Just looking at this one set of explanations centering on the people of Eastern Europe shows already what a multi-layered and nuanced experience historical experience 1989 offers, both for the big picture of human rights, traditional values and consumer demands and the small details the game generously sprinkles over it. We’ll go on exploring these in the article of this series that will look at the explanations for the collapse of Communism which make the Western governments the principal agents.

1. Often, these theories tell more about the proponents and their times and thought than about the Roman Empire.
2. “Democrat” is surely a more practical and evocative way to name a player than “people driven by the desire for political freedom, traditional values and material goods”.
3. East Germany increased its number of political prisoners despite political liberalizations in the 1960s and 1970s. By then, West Germany “ransomed” political prisoners, so every one of them was a potential source of Western currency.