Recently, there has been no hotter theme for board games than Vikings. No matter if you were looking for a light wargame, a classic economic Eurogame or an ameritrash-euro hybrid, Vikings got you covered. After all the raiding, drinking beer and worshipping pagan deities, some of these “men from the north” or “Normans” settled down in the part of modern France which was named after them Normandy. The Viking knack for conquest was however not completely lost. One Norman duke took England for himself in 1066, which did not only give him the kingdom, but also the nickname William the Conqueror.[1] Other Normans went south. One thousand years ago, in the year 1017, a band of mercenaries under the Norman noble Rainulf Drengot arrived in lower Italy to fight for Pope Benedict VIII against the Byzantines. They and their successors would go on to conquer large parts of southern Italy, rule over a multicultural kingdom, and inherit the title of Holy Roman Emperor.

The Norman conquest of southern Italy was rather accidental – there was no master plan to it. The first Normans came to Italy as mercenaries, most of them being later-born sons with no hope to inherit lands and titles in Normandy. Italy was their opportunity to gain fame and wealth. While they were often employed by the Pope in his struggle against the Byzantines, the Normans became increasingly confident, and, eventually, independent. Even when the Pope banded with the Byzantines against them, they were able to hold their own, smashing a joint Papal-Byzantine force in the battle of Civitate 1053. Civitate showed that an army of armored knights could beat superior numbers. All major armies of the High Middle Ages would go on to rely on heavy cavalry as the Normans did. The battle is one of the two scenarios in the Normands et Byzantins (Vae Victis, Florent Coupeau) installment of the À La Charge series of light tactical wargames set in the Middle Ages. The rules are very simple (you can find an English translation of the French original here), and it works very nicely as an introductory game to battle gaming.
After Civitate, the Normans were not content with serving anymore. In the many campaigns in lower Italy that were to follow, they carved out titles and lands for themselves, becoming formal vassals to the Pope or the Emperor. Finally, one of the Norman nobles, Roger of the Hauteville family, laid his eyes on the big prize of Sicily which was under Arab rule at the time. Roger fought for three decades in Sicily, incrementally gaining more and more of the island, until he finally controlled all of it in 1091. The conquest of Sicily had ramifications far beyond Italy: When the Pope was freed of Muslims on his doorstep, he set his mind to grander ideas. Four years after Roger finished his conquest, Pope Urban II called for the first crusade to drive the infidels from the Holy Land.
The conquest of Sicily was a long affair more notable for feats of logistics than for spectacular maneuvers or heroic battles. The Normans, however, had their man for such matters too: Robert Guiscard (his nickname meaning “The Cunning” or “The Weasel”) fought in many of his brother Roger’s campaigns in Sicily, but that did not fully occupy him. While he was the sixth son of a petty Norman noble, he would prove more than a match for two Emperors and a Pope. Guiscard’s campaigns in central Italy in the 1070s brought him into conflict with the Pope who excommunicated him, but he deftly maneuvered the tensions between Pope Gregory VII and Emperor Henry IV to his benefit: The Pope needed him as an ally, lifted the excommunication and sanctioned his previous conquests. Now Guiscard looked eastwards. His daughter had married the Byzantine crown prince, and Guiscard laid claim to the Byzantine Empire on these grounds. His campaign in Greece was a resounding success. Before he could sail for Constantinople, however, events in Italy required his return there. Emperor Henry IV had gained the upper hand in his struggle with the Pope, occupied Rome and forced Gregory to officially crown him Emperor there in 1084. When Guiscard’s army arrived a few weeks later, Henry fled. Guiscard returned power in Rome to the Pope and went East again. Once more, his assault on Constantinople was prevented by an unfortunate event – this time, he contracted typhoid fever. He died of typhoid in Greece in 1085. 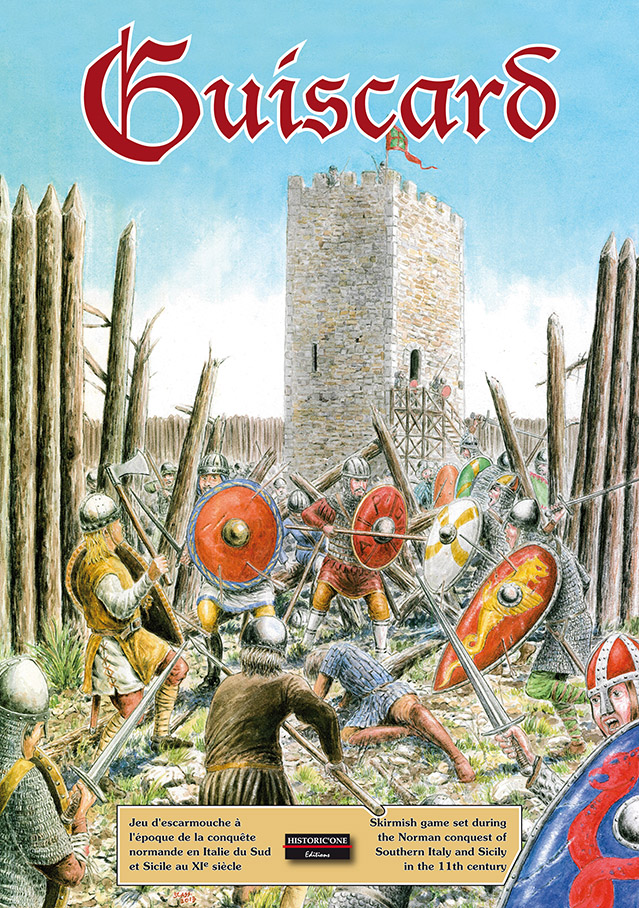 Guiscard lets you engage in medieval hand-on-hand combat on the board. Better not let the protagonist die! Image © Historic-One.

Robert Guiscard is the protagonist of the aptly named Guiscard (Historic-One, Buxeria), a game of the Cry Havoc series of skirmish combat in the Middle Ages. “Skirmish” means that the unit counters represent one character only (all of them individually named), the hexagons on the map stand for only a few square meters of ground and every turn for less than a minute in time. The game offers both an intriguing peek at Guiscard’s life (as told in many scenarios taken from his various fights in continental Italy, Sicily and Greece) and a wargame experience dealing with a not-so-common theme and scope.

Multiculturalism in the Kingdom of Sicily

The Normans were not only remarkable for their martial skills. They also ruled large tracts of land in lower Italy and Sicily which by 1130 had all fallen to Roger II, the son of the conqueror of Sicily, who was made king of Sicily by the Pope in that year. Sicily, located in the center of the Mediterranean at the shipping lanes connecting East to West, North to South, had always been a cultural melting pot. Before Roger I had conquered it, the Arabs had ruled the island, who in turn had taken it from the Byzantines. The Norman rulers built on these foundations and successfully integrated the three different cultures under their rule. This resulted in many intriguing mixed or hybrid elements in the Norman-Arab-Sicilian culture: 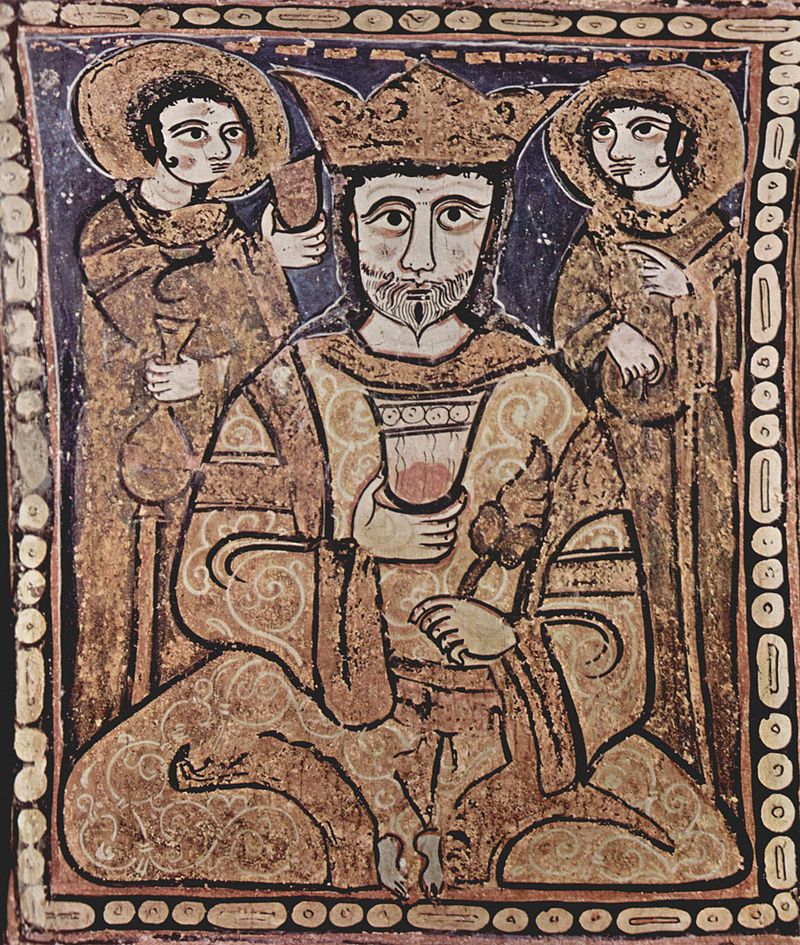 Roger II was able to reap these fruits of multiculturalism because he showed an extraordinary amount of tolerance by the standards of his times. He let his subjects keep their respective religions and did not make any attempts to convert the Muslims and Eastern Christians to Catholicism. His administration addressed the multilingual populace with edicts in their respective languages. While the political elite was formed by Normans, the Byzantines and Arabs could reach influential positions in the administration as well, and Roger and his successors made sure to include Byzantine elements in their royal rites or choose Qur’an verses as their government mottos. This willingness to navigate the complex waters of tolerance and ambiguity was also exemplified by Norman Sicily’s foreign policy, which mixed an almost constant alliance with the Papacy with good relations with the Muslim neighbor states in North Africa and a neutral stance towards the Byzantine Empire.

Norman Sicily and the Hohenstaufen Emperors

Another tenet of Sicilian foreign policy was a near-constant enmity with the Emperor. This boded ill for the kingdom, when William II (Roger II’s grandson) died without issue in 1189. Emperor Henry VI of the Swabian Hohenstaufen dynasty, who was married to Roger’s daughter Constance, claimed the kingdom. After he had secured power in Germany – his father, Emperor Frederick I Barbarossa, had died almost at the same time as William – he descended upon Sicily. The conquest was helped by the ransom Henry received from England for the release of his prisoner, King Richard the Lionheart – 100,000 pounds of silver, surely a sum to finance a campaign with![2]
At this zenith of Hohenstaufen power The Staufer Dynasty (Z-Man Games/Hans im Glück, Andreas Steding) sets in. Players compete to fill important posts in Henry’s courts while he is touring his vast empire from Nijmegen (modern-day Netherlands) to Palermo on Sicily. Unfortunately, that theme is not more than a thin overlay for a game centered very much on its mechanisms. The historical takeaways do not go beyond mentioning the Emperor and giving an idea how far his possessions spread. 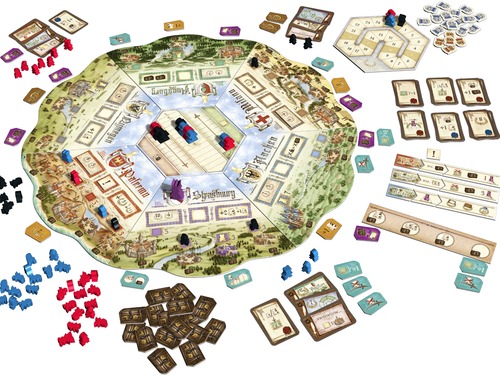 The son and heir of Emperor Henry VI and his wife Constance of Sicily was Frederick II who came to be known as stupor mundi – the astonishment of the world. He acquired this nickname for his intellect, rationality and breadth of interests – he spoke six languages, fostered science and the arts and even wrote the first scientific book about falconry (De arte venandi cum avibus, The Art of Hunting with Birds). Frederick II was the grandson of both Emperor Frederick I Barbarossa and king Roger II of Sicily. From the former he inherited a liking for grand designs (including his crusade on which he had himself crowned king of Jerusalem) as well as for quarreling with the Pope (who excommunicated him three times and named him the Antichrist), from the latter his tolerance and intercultural competence (much of his crusading success was due to finding understanding with the Muslims instead of just trying to kill them). While therefore a legitimate successor of both Norman and Swabian rulers, he was by his upbringing and his power bases a Sicilian most of all.

Good introductions to the southern adventures of the Normans are Norwich, John Julius: The Normans in the South 1016—1130, Longmans, London 1967 and Brown, R. Allen: The Normans. Boydell Press, Woodbridge 1984.
If you are interested in the remarkable multiculturalism of Roger II’s times, look no further than Houben, Hubert: Roger II of Sicily. A Ruler Between East and West, Cambridge University Press, Cambridge 2008.
For the later period of the Kingdom of Sicily see Abulafia, David: The kingdom of Sicily under the Hohenstaufen and Angevins, in: id. (ed.): The New Cambridge Medieval History, Volume V c. 1198 – c. 1300, Cambridge University Press, Cambridge 1999, p. 497—521.

1. Certainly preferable to his previous moniker William the Bastard.
2. This amounted to two or three times the annual income of the English crown.