So, you know Twilight Struggle. The game has a certain fame to it – it was the best-ranked game on boardgamegeek.com for five years, after all. That’s even more impressive when you consider that a game of Twilight Struggle can easily take two hours, seats exactly two players and is a bit more daunting than most of the eurogames that tend to do well on BGG.[1] Now, while it is not too hard to get into playing Twilight Struggle – the rules are elegant and not too complex – mastering the game is a whole different matter. There are 400+ threads on BGG’s Twilight Struggle strategy subforum. There is an entire website dedicated to brilliant little strategy essays on every single card in Twilight Struggle. When you play against an experienced player online, not only do they know every single card in the deck, they also seem to know which cards have been played already and which are still to come at any given moment of the game. So, is Twilight Struggle only for the select few, for the initiated who have dedicated their lives to the study of the game? By no means! The strategic basics are quickly taken in. See your fortunes in the Cold War improve by following these three tips. 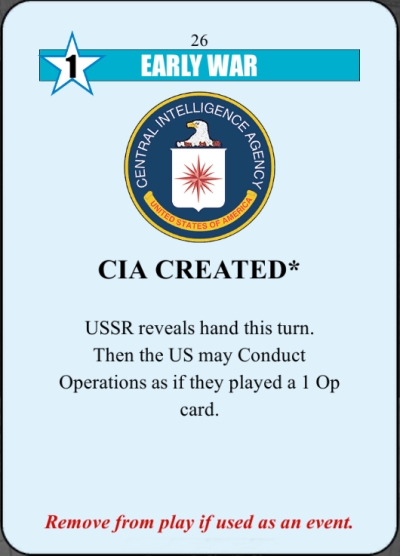 The CIA is ready for nuclear war (image from Twilight Struggle, © GMT Games)

To win, you must not lose. The quickest way to lose is starting a nuclear war. So, you’ll really want to avoid that. DEFCON will drop soon to 2 in most games. Then every opponent card event that lowers DEFCON is a deadly trap. Even more devious: Every opponent card event that allows your opponent to conduct operations is also a deadly trap (if they can use it for a battleground coup in Africa or the Americas). The classic example is playing CIA Created as the Soviet Union, just to have the USA coup your recently acquired Cuban foothold or a freshly Decolonized African battleground and lose you the game. When it comes to nuclear war, it’s better to be safe than sorry.[2] Dispose of these deadly traps as soon and safe as possible. Sometimes you can raise DEFCON or cancel out card effects with other cards and save yourself (and the world) that way. If not: Space them if you can (requires the cards to be worth at least 2 ops), headline them if spacing is not possible (to make use of DEFCON having been raised for the new turn), hold them if you must (to live another turn and maybe be luckier then).

You’ll receive very different benefits depending on where you choose to spread your influence. Generally, you want to directly affect the scoring with your play – e.g., increasing your position along the line of “nothing” over “Presence” and “Domination” to “Control” or decreasing that of your opponent. For that reason, playing into regions that are safely dominated by either you or your opponent is normally no good idea. Also, playing into regions that have just been scored and will only be scored again after the next reshuffling of cards is less attractive than playing into yet-to-score regions. It also pays off to monitor your opponent’s behavior and respond to it – if she is playing heavily into one region, chances are she might hold the scoring card for that region.

The sinews of the Cold War 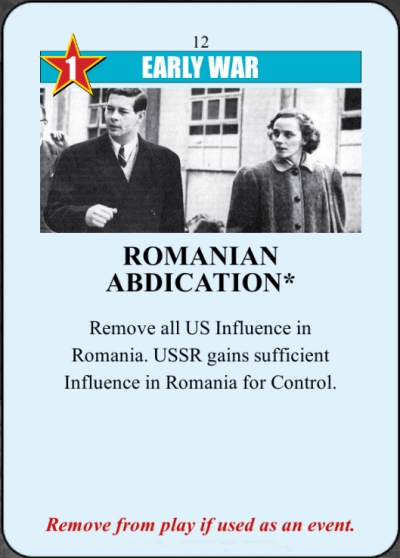 This is a nice little event – and normally better played for ops (image from Twilight Struggle, © GMT Games)

Cicero called unlimited money the sinews of war.[3] The sinews of the Cold War are unlimited ops. Ops beat all the other alternatives for playing a card in most circumstances because they allow you to put pressure on your opponent how and where you want. I see where the allure of playing cards for the event comes from – the event are usually more powerful in terms of raw influence than the ops, the event text and picture make up almost all the card whereas the ops value is just a small number, and it feels so much more exciting to wage the Korean War instead of just putting two markers on a board. But raw force and excitement of events lose to the surgical precision and cold calculation of ops. Especially in the beginning, when the map is still empty and up for grabs, that is immeasurably valuable. Later, you might need an event every once in a while to shake up things in a previously locked down region, but even then, the majority of your cards should be played for ops. That means you will often play your own and neutral cards for ops instead of the event and play opponent cards for ops (and the opponent events) instead of spacing them. This also has the nice side effect that your opponent’s one-time events will leave the deck whereas yours stay in, ready to pose a challenge to your opponent when she draws them and stacking the deck ever more in your favor. Of course, you’ll still want to play your very strong events as events (including as headlines), and especially the USSR can have trouble to get into some regions of the board without events (Decolonization and De-Stalinization are the master keys to these doors) but if in doubt, I’d rather go for the ops.

Did these tips help you? Do you follow a different approach? What is your best tip for beginning Twilight Struggle players? Let me know in the comments!

1. As I write this, Twilight Struggle is still listed at #4 on the general BGG ranking. The next game in that ranking which is also listed as a wargame is Command and Colors: Ancients at #92.

2. And be happy that the American and Soviet leaders of the Cold War eventually agreed with that.