The 1968 protests in the Americas and especially Western Europe were often inspired by Marxist thought. But how does one rebel when Marxism is already the official ideology of the state? This article will have a look at the revolts in Czechoslovakia and China – and the board games in which they feature. This will wrap up this year’s 1968 miniseries on the blog.

Socialism with a Human Face: The Prague Spring

Czechoslovakia had been the most stable democracy in Central Europe in the interwar period. Then came the Nazis and dismembered the country. When the Soviets liberated Czechoslovakia, they suspiciously watched all that pluralism going on for some time, then in 1948 decided it was too wild and conducted a coup. In best Czech tradition, they had the central non-Communist figure in government, foreign minister Jan Masaryk, killed by throwing him out of a window. Ideas, however, were harder to kill.
Flash forward over twenty years of Stalinist rule to 1968. Dogmatic and reformist factions in the Czechoslovakian Communist Party vied for power. By now, the Soviets had grown disenchanted with the old guard of the Czechoslovakian Communists and suggested a change of leadership to the party. Thus, Alexander Dubček, the leading reformer, was made First Secretary of the party.
Dubček put forward an ambitious reform program in April 1968. Not only did it suggest economic reforms (a staple for Communist reformers), but it also contained a more liberal approach to freedom of speech and information. Most explosively, it also promised far-reaching political changes, including a critical evaluation of Stalinism, a de-centralization of power away from the Communist party, and even a return to a multi-party system. In short, Dubček aimed for – to use his words – “socialism with a human face”.
The liberalization of speech and information was put to practice first. Press censorship was abolished, and within weeks, an independent press flourished. People started debating politics in the streets. They put forward manifestos of their own. Especially Prague was a hotbed of rediscovered civic political activity. A vast majority of the population supported Dubček’s reform program.
However, a movement based on pluralism could not be held together by one man, not even one as popular as Dubček. It was only natural that dissenting opinions would be voiced, opinions outside the scope of Communist reformism. That was enough to make more conservative Communists uneasy. Soviet General Secretary Brezhnev urged Dubček to take back his reforms and restore “order” again. Key Soviet allies like East Germany and Bulgaria even demanded a military intervention. But how would Dubček, who did not control the people in the street, force them to do as he wished? Once the genie of a pluralist public was let out of the bottle, it could not be put back in. Brezhnev, who personally had preferred a political solution, gave in to the demands of his allies and authorized an invasion of Czechoslovakia by the Soviet army and troops from four allied countries. Romania and East Germany did not participate in the invasion. Romania did not want to as her erratic and cruel ruler Nicolae Ceausescu feared the Soviets might oust him via an invasion as well. East Germany, however, was eager to show her worth as an ally of the USSR, but the Soviets prohibited them as a new invasion of Czechoslovakia by German troops 30 years after the Nazi annexation of the Czechoslovakian Sudetenland would have been guaranteed to be bad press.
Not that the invasion itself was anything but bad press. A military invasion as a reply to an attempt to reform the socialist practice delegitimized Soviet socialism among its last sympathizers in the West. The Communist parties of France and Italy broke with Moscow and became independent, “euro-communist” parties. Even more importantly, Communism lost its credibility among previously mildly sympathetic Easterners. Where there had been at least the promise of a better world, there was only resentment now.

The Czechs and Slovaks did not forget 1968. Neither did they forgive. The memory of the repression fuelled new demands for reform in 1989. Card “Legacy of 1968” from 1989 (Ted Torgerson/Jason Matthews, GMT Games).

The Soviet policy of intervention, previously based on ad hoc decisions, now became formalized as the Brezhnev Doctrine: The sovereignty of socialist countries, said Brezhnev, had its limits where it concerned the interests of the socialist community. Independent paths within the socialist sphere were thereby prohibited.

The Brezhnev Doctrine put the relationship between the Soviet Union and the states in her orbit on a new foundation. It deterred the Soviet satellite states from revolting and made further Soviet interventions unnecessary, allowing the USSR to focus on other goals. Card “Brezhnev Doctrine” from Twilight Struggle (Ananda Gupta/Jason Matthews, GMT Games).

This did not go well with the biggest socialist country – the People’s Republic of China, always zealously guarding her independence. Sino-Soviet relations had been rocky for years already, but now they were truly awful. But what happened during the late 1960s in China?

The Tiger’s Teeth: China and the Cultural Revolution

To most Western observers, China still formed a part of the monolithic Eastern bloc. But where the Soviet Union and her Eastern European satellites patted themselves on the shoulder for establishing stable socialist societies, China’s Mao, who was fond of likening himself to a tiger, the great predator of Asia, did not believe in virtues of quiet. Too long a time without upheaval, and class hierarchies would form again, he thought. They could only be held at bay by a permanent revolution. That was no popular stance, not even in the China Mao had created. The memory of the disastrous “Great Leap Forward” which wrecked China’s agricultural production and led to the starvation deaths of approximately 30 to 40 million people was still fresh. Mao’s penchant for upheaval increasingly isolated him within the Chinese Communist leadership. In 1966, Mao attempted to solve both problems – the societal stratification he perceived and his personal loss of power – by doing what he did best: Create chaos. He called for an uprising against perceived bourgeois elements in the media, politics, and the education system – the “Great Proletarian Cultural Revolution”.[1]

The Cultural Revolution strengthened the revolutionary faction within the Chinese Communists at the expense of the pragmatic reformers – at least in the short term. Card “Cultural Revolution” from Twilight Struggle, ©GMT Games.

Especially high school and university students, calling themselves “Red Guards”, heeded Mao’s call and took to overthrowing their teachers – be it that they actually agreed with Mao’s societal analysis (or at least thought they owed him allegiance) or that they were motivated by the all-too-common desire of students to turn the hierarchies between themselves and their teachers upside down. The uprisings were incredibly violent, and one year into the Cultural Revolution China was embroiled in a virtual civil war between various political factions within the Communist Party, the Red Guards, and regular army units.
That’s the situation in which Redguard (Brian Train, Schutze Games) throws its players. Up to six players, each representing one faction within the Chinese Communists, vie for control over societal, political, and economic institutions ranging from the smallest commune to a national ministry. The game is wild. It’s incredibly random at times. It’s a free for all with no holds barred. The only way to beat the “Take that” move your opponent throws at you is to one-up her with an even bigger “Take that!”. Attacking relentlessly is the only way to win. If Mao was still alive (and into board games), he’d certainly like this one – maybe even as much as he’d enjoy Mao. 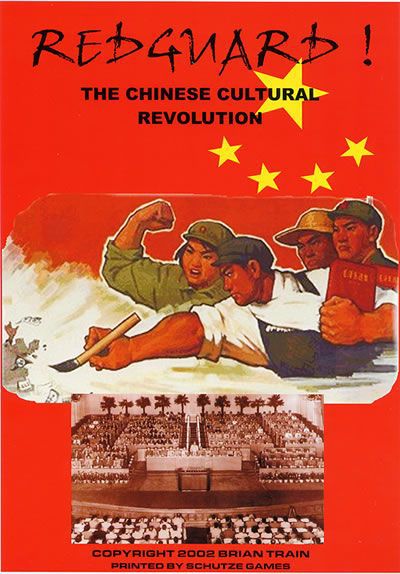 Can you feel the revolutionary spirit already? Box cover of Redguard, ©Schutze Games.

Politically, the Cultural Revolution was a success for Mao. The furor of the Red Guards fortified his power in Beijing and the surroundings. In the provinces, however, the Red Guards were less successful, and a lengthy struggle with the regular army began. Like Goethe’s “Sorcerer’s Apprentice”, the spirits that Mao had conjured no longer heeded him. Mao, however, was not too attached to his fanatical erstwhile followers. He called on those who could still be persuaded to step down from their crusade, the others he had shot down by the regular army units. Mao declared the mission of the Red Guards to be over by late 1968 and sent millions of them from the big cities to the countryside where they were supposed to learn from the peasants.
The Cultural Revolution wrecked the Chinese education system which was back to regular teaching only by the late 1970s. It was the last large upheaval of Mao’s tumultuous life. Afterward, even he, the prophet of permanent revolution, turned to status quo politics. Although Mao had turned against the revolutionary Red Guards as early as September 1967 already, he remained an icon of revolutionary politics to many leftist Westerners for years.

The individual revolts of 1968 shared the rejection of tradition and authority, however, they were unconnected. Nonetheless, protesters in one country were aware of the protests elsewhere (especially when they were televised) and often felt inspired by them. In that sense, the 1968 protests were one of the earliest truly global events.
The status quo powers in all countries defeated the protesters and would-be revolutionaries with the use of some force – ranging from crowd control police in the Western countries to full-blown military interventions in the Communist East. In the aftermath of the uprisings, they sought to de-politicize an ideologically mobilized populace and implement law and order politics. The superpowers and many of the smaller nations who had been shook by protest committed to international détente after 1968 to shift attention and funds from the Cold War tensions to their domestic reforms. Be it in the form of Chicago, Paris, or Prague, 1968 remains an iconic reference – both for its supporters and its adversaries – until today.

You can find an account of the reverberances of the Prague Spring in Petruška Šustrová: Czechoslovakia: Lines of Tanks in Prague, in: German Historical Institute Bulletin Supplement 6, 2009, online here.
Mark Kurlansky gives a collage of the events, focused on how much they were globally inspiring each other in 1968: The Year that Rocked the World, Random House, New York City, NY 2005.
Jeremi Suri’s account of the upheavals focuses on the governments implementing policy against their own constituents and how this made them turn to détente: Suri, Jeremi: Power and Protest. Global Revolution and the Rise of Détente, Harvard University Press, Cambridge, MA/London 2003.

1. That Mao purposely left out the economy showed that the lessons of the Great Leap Forward were not entirely lost on him.