How fast the year has (almost) passed! As always, actually. And, also as always, it’s been eventful. The major change in my life is that I’ve finished my M.A. thesis (on the Cold War in board games). That means that I am no longer at least part-time professionally involved with history (I work in a non-related field), but my passion has not faded. In fact, one of the first things I did after my enrollment at university was terminated (and with it my access to the university’s libraries) was to create an account at another scientific library for myself. The books on history keep rolling my way.
So, there has been reading, but, of course, also a lot of gaming and blogging (historical or not). I’d like to share some of my favorites from this year with you. You’ll notice that hardly any book or game of those (or none at all?) was published in 2018. I have played games and read books from 2018, but they haven’t made it to these lists. New is not always better.
I give three nominations per category and crown one the winner – one category per day. So, let’s start with our first category.

I stole this idea from Dave’s blog (which you should totally check out if you like board games). Dave plays a lot of different board games and gives a quick report about those that were new to him every month – how they play and how he liked them. Now I play by no means as many new games as he does (and I must confess that rule learning is not my favorite part of board gaming, which limits this further), so for me, once per year sounds about right. Here are my top three games that I played for the first time in 2018.

I know, I’ve been living under a rock for the last ten years. Pandemic is a modern classic that helped pave the way for our current golden age of cooperative games. On Board Game Geek, only Catan and Carcassonne have more ratings. That said, Pandemic does deserve its popularity. It’s simple to play and even simpler to teach. For a game this mechanically elegant and abstracted, it’s doing theme pretty well. And it’s got a nice story arc of outbreaking diseases that get ever more vicious while your team also gets closer to finding cures. Pandemic wouldn’t be my go-to game for an amazing experience with seasoned gamers, but it delivers very solidly for these while being an ideal gateway game. 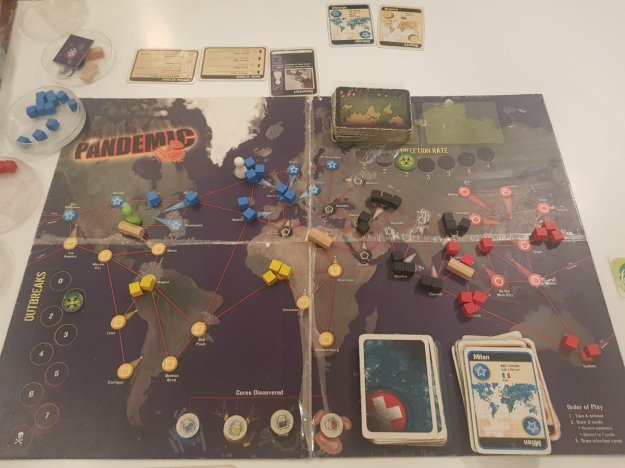 End of Pandemic: All four diseases are cured!

Okay, now you see I’ve really been living under a rock. But I swear, it is a very comfortable rock. Also, it houses the oil and coal supply that is the source of my famed wealth as I sell all of it to entrepreneurs of electrical energy. Myself, I am less successful at running an electricity company. The one time I played Power Grid, I was soundly beaten. It came as no surprise, as my opponent, an electrical engineer, had inside knowledge. You know a game is good when you get excited about it after losing. Power Grid is a tooth-and-nail fight over power plant auctions, fuel supply, and grid expansion. If you’re in for that, it is a pretty electrifying experience.

Red and Green jockey for position on the map in Power Grid. Note the puny $1 bill next to the power plant cards to the very right which constituted my entire cash-on-hand at the time.

Did I write I wouldn’t go to Pandemic for an amazing time with seasoned gamers? Well, that’s because I would go to Here I Stand for that. I have played two sessions with the full complement of six players this year (plus several more with fewer players or in the two-player scenario), and the experience is just mind-blowing. People get really invested in their roles as Emperor, Pope, or Sultan. Suddenly history clicks for them. Normally perfectly equanimous individuals get really anxious over diplomatic deals. I probably had the nerdiest moment of my life this year when our Popess in one session realized she had promised both an alliance to the Emperor and a divorce to English king Henry VIII (which are mutually exclusive) and then rushed to mend her diplomatic framework. Everyone is really excited from noon to past midnight. …and there we already have Here I Stand’s little flaws. It is a complicated machine with a plethora of little rules, and it lasts epically long. But if you have six players who are willing to make the effort to learn the rules well enough to be ready to play and then commit to a long gaming day, nothing compares to Here I Stand’s glory.

Setup of Here I Stand: Europe is ready to be converted to your religion and/or conquered by your troops. Twelve hours of gaming fun ahead!

What were your favorite new-to-you games this year? Let me know in the comments!