And here’s the third post in this year’s series of books and games I enjoyed most. The previous two were on new-to-me board games and historical fiction. Today, I’ll continue with my favorite non-historical board games. In case you missed it, the “rules” are simple: All lists are based on my personal reading/gaming of 2018, regardless when the book/game was published. The top three in each category are given and one of them is named the winner. On to the best…

Non-Historical Games I Enjoyed in 2018

Viticulture makes this list for the second year in a row. That alone is testament to the staying power of the game. Like a fine wine, it just keeps getting better. Speaking of wine: We all talk about immersion in board games, but here it is really easy to be done: Have some wine with it! (It helps that Viticulture does theme really well, especially for a eurogame.) I had one particular game of Viticulture this year that happened after we’d played a very rules-heavy game. So, everyone relished in playing something relatively straightforward, and the mood got relaxed and even a bit raucous. When the game ended, we had shared two bottles of wine between four people (the fifth player did not drink). And the game ended in a four-way tie at 23 points between exactly the four wine-drinking players. Conclusion: Drinking wine also makes you better at Viticulture. 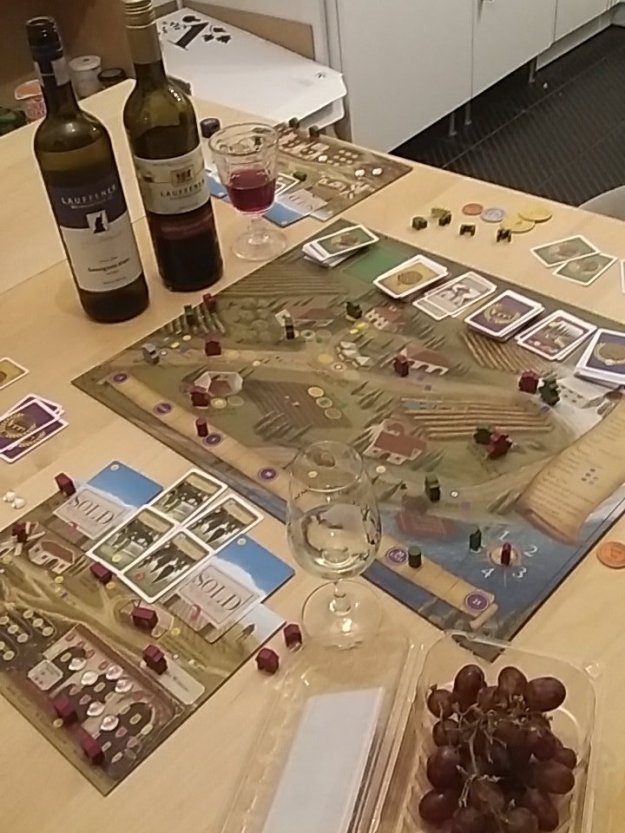 As you might have guessed from my post about historical fiction I enjoyed this year, I’m definitely in for long series (The First Man in Rome is the first book in a seven-book series, and HMS Surprise is even only the third of 21). The same goes for board games: My small gaming circle from undergrad days was all about Legends of Andor in 2014 or so, and also played the expansion The Journey to the North (as well as the Star Shield expansion and several bonus or fan legends). Now, four years later, we’ve started the last instalment in the trilogy. The Last Hope delivers the high standard one expects from an Andor game: smartly designed and varied challenges, step-by-step teaching of the rules, beautiful components, and a fair amount of refreshing new features. As all of us have finished our post-graduate degrees since then and we live in different states by now, gaming meetings have become a rare (and treasured) occurrence – but I expect us to finish The Last Hope somewhen in 2020 if we keep our current pace.

Legends of Andor: The Last Hope: Thorn and Kram build bridges, not walls.

And the winner is…

Pretty easy choice this year. I’ve played Eldritch Horror more than any other game this year, and given that it easily takes four hours, that’s quite remarkable. So, what does Eldritch Horror do right? Quite a lot of things. You can see that it was designed by people who are good at writing stories. The characters are memorable, the encounters drag you deep into the game world, and the game builds something like a true narrative arc from the beginning when you vaguely know something is off and the end when you might have to duke it out with Cthulhu himself. A decent number of characters to play and Ancient Ones to combat ensure replayability. However, after you’ve played the game a number of times, quite some of the encounters fill you with a sense of déjà-vu. I hear the first expansion Forsaken Lore addresses these issues. Until then, you’ll still have a jolly good time desperately trying to save the world from destruction with a lot of fist-bumping when you find the Necronomicon and gasping when you travel back in time and your own father threatens to fire a shotgun in your face. 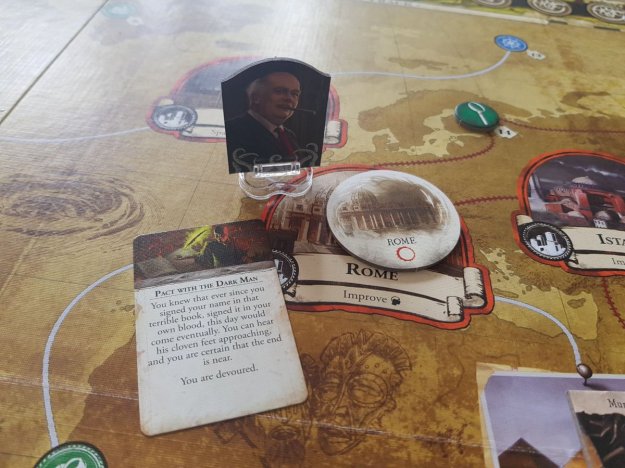 Charlie Kane has made a Dark Pact in his careless youth, and now the Dark Man comes to collect his due. Everyone pays their price in Eldritch Horror.

What were your favorite (non-historical) games this year? Let me know in the comments!