Welcome, readers! You have just come upon my first post in the new series A Century of German History. This year, I will post ten articles, one for each decade of the 20th century. The century was the most dramatic in our history.[1] And it was possibly nowhere more so than in Germany, a country that found itself sometimes on the wrong side of history, sometimes on the right, and sometimes even on both at the same time. The series does therefore not only attempt to show you some German history, but also shed light on the wider processes of those times in which Germany was both a subject and an object. Each article will feature one focal event (all of them in the year ending in a 9) and use one – and only one! – board game to illustrate it. Today, we begin with the superpower bickering over Berlin during the Berlin Crisis (after looking at West Berlin’s special situation). The board game to come with that, however, focuses on Cuba: 13 Days: The Cuban Missile Crisis (Asger Harding Granerud/Daniel Skjold Pedersen, Jolly Roger Games). Why did I choose this game then? Read and find out.

During World War II, the Allies had agreed to put Berlin under a joint administration once they had won the war. Accordingly, the city was partitioned into four sectors after the war (a Soviet, American, British, and French one) – just like Germany as a whole – but the responsibility for Berlin as a whole remained quadripartite. Soviet-Western cooperation, however, fell apart soon after the war ended. As Berlin was in the middle of the Soviet-occupied zone of Germany, the three Western sectors made for an island in the Red Sea. The Soviets were quick to seize on this advantage. In 1948, they denied all access to the Western sectors of Berlin from the outside – the Berlin Blockade. Stalin hoped to either incorporate West Berlin into the Soviet Occupation Zone, or gain concessions in West Germany for lifting the blockade. However, the Western Allies were able to supply West Berlin entirely through the air, and their counter-pressure succeeded in having the Soviets end the blockade. The quadripartite status of the city remained unchanged. So did the uneasy feeling in West Berlin: The Soviets continued to harass Western traffic to West Berlin every once in a while, and they could blockade the city again at their leisure.

13 Days is an unintuitive choice for a game to illustrate the Berlin Crisis. After all, the game is about the Cuban Missile Crisis, which, as you’ve read above, only touched on Berlin. However, it’s a marvelous example for Cold War politics: As the bickering over Berlin showed, the city served as a pressure point, a bargaining chip, and a weak spot. 13 Days shows how Berlin was but one piece in a big puzzle and how fighting about one thing can, in fact, be much more about another. 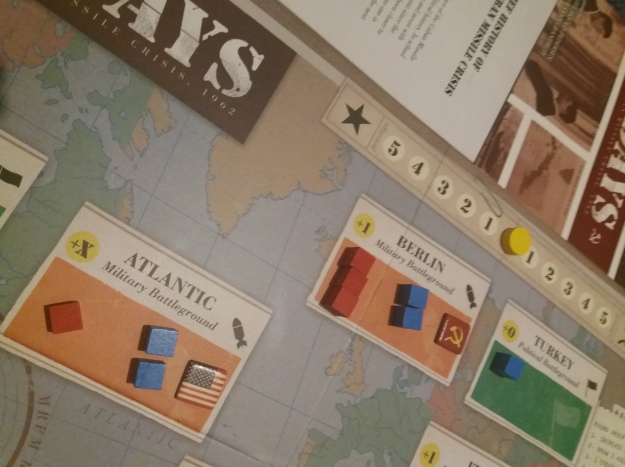 The influence in Berlin is piling up during the Cuban Missile Crisis (red cubes: Soviet influence, blue cubes: American influence). The Soviet flag marker in Berlin signifies that it is a potential agenda (scoring card) selected by the Soviets this round.

Berlin is one of the “battlegrounds” on the map of 13 Days, and, consequently one of the secret agendas the superpowers can have. US and USSR can place their influence in Berlin, and if one of them selects Berlin as their agenda for a round, whoever has more influence there at the end of a round scores prestige (victory points). Berlin is a military battleground (as opposed to political and public opinion battlegrounds), emphasizing that military forces might make a difference there (as in the tank standoff at Checkpoint Charlie or when the Soviets might block off access to the city).
The Soviet start with the advantage of having already placed one influence in Berlin, reflecting their advantageous position with Berlin surrounded and their previous advances that walled in the West. The US face therefore an uphill battle in Berlin, and when they suspect that the Soviets have secretly selected Berlin as their agenda, they will feel as uneasy as Kennedy did in 1962 – but maybe a special effort can turn the tide? Or maybe the Soviets can be distracted elsewhere? Or maybe the Soviets are just faking it and have indeed set their eyes on another prize? Those are kinds of thoughts you’ll have playing 13 Days. 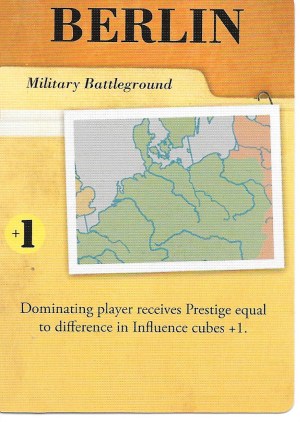 But, of course, Berlin was valuable in itself as well. As the symbol of the division of Europe (and of the Allied victory over Nazi Germany), taking it might be worth for the Soviets despite the risk of nuclear war (after all, a risk is nothing but a probability). That is reflected in the Berlin Blockade card – when the event is triggered, the Soviets gain two prestige (which is a huge swing in this game), but they also give the US a big opportunity to manipulate the level of Soviet escalation – and if you start a war, you lose in 13 Days.

Which other games do you know that feature the very special role of Berlin in the Cold War? Let me know in the comments!

You’ll find a comprehensive (if sadly riddled with some factual inaccuracies) account of the Berlin Crisis in Tusa, Ann: The Last Division. Berlin and the Wall, Hodder & Stoughton, London 1996.
Hope M. Harrison makes the case for the Soviets ultimately only giving in to East German demands and provocations in the crisis, see Harrison, Hope M.: Driving the Soviets up the Wall. Soviet-East German Relations, 1953—1961, Princeton University Press, Princeton, NJ/Oxford 2003.
The opposing view – that Khrushchev remained firmly in the driver’s seat – is espoused by Wettig, Gerhard: Chruschtschows Berlin-Krise 1958 bis 1963. Drohpolitik und Mauerbau [Khrushchev’s Berlin Crisis. Politics of Threats and the Building of the Wall], Oldenbourg, Munich 2006 (in German).
For the Cuban Missile Crisis, a detailed study of the sources from both sides is Fursenko, Aleksandr/Naftali, Timothy: “One Hell of a Gamble”, John Murray, London 1997.

1. As a historian specializing in the 20th century, I am bound to think so. Scholars of other eras will, of course, disagree and name their respective times as more dramatic. As Blumin’s Law states: No matter the subject, every historian will pipe up and claim it to be most pronounced in their era of study: “It happened in my period!”
2. Khrushchev’s colorful imagery never ceases to amaze me. It also gave the Moscow- or Leningrad-educated part of the Soviet elite the feeling that this Ukrainian peasant was a bit of an embarrassment for the Soviet Union.

16 thoughts on “The Berlin Crisis (Century of German History, #1)”