Friends, Romans, countrymen, lend me your ears! Welcome back to our story of Hannibal and Scipio! In the first part of this account, we’ve covered their upbringing as spawns of the noblest families of their respective cities and the first part of the war that would define both of their lives. We’ve seen how Hannibal defeated Roman armies in Italy time and again, but could not force the Romans into surrender. When Rome adapted her strategy and avoided battle with Hannibal, his forward momentum stalled. After a disastrous defeat of the Roman expeditionary army in Spain, the senate sent young Scipio with there to avenge the death of his father and uncle.

Scipio didn’t waste time in Spain. He landed close to New Carthage, the symbol of Carthage’s power in Spain, and made for the city. New Carthage was strongly fortified, but Scipio managed to surprise the defenders by opening an additional front in the middle of the battle: The lowering tide allowed his men to wade through the lagoon in the north of New Carthage and take the city. Scipio had started his campaign with a bang. 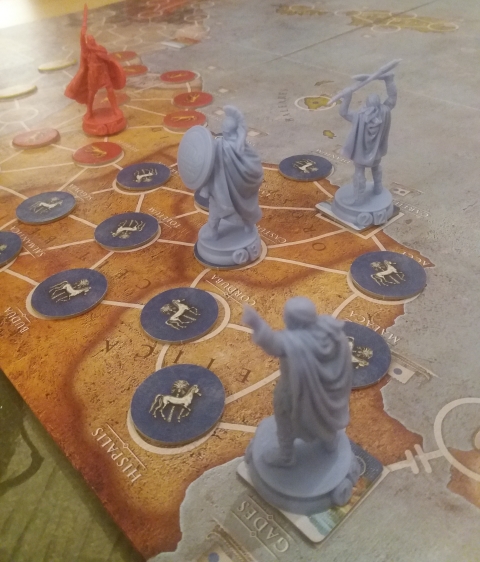 Hannibal’s brother Hasdrubal turned his army against Scipio and took up a superior position at Baecula. Scipio was wary of attacking, but feared Hasdrubal might be reinforced by his brother Mago and Hasdrubal Gisgo, who led two other Carthaginian armies in Spain. Scipio had his infantry attack the Carthaginian center uphill to pin the Carthaginians down. Meanwhile, he and his cavalry commander Gaius Laelius moved the troops on the flanks around the Carthaginian army and thus attacked them from three sides. Hasdrubal’s army broke. Scipio did not pursue his army any further, so Hasdrubal was free to lead his remaining forces out of Spain to reinforce Hannibal in Italy.
Mago and Hasdrubal Gisgo remained in Spain and mustered more troops. Scipio moved against their joint army and met them at Ilipa in 206. While the Carthaginians followed the traditional approach and deployed their elite African soldiers at the center of their battle line and the less reliable Iberian troops on either side, Scipio reversed this and stationed the best legions on the wings. He then advanced with the wings but avoided battle in the center. As both Carthaginian flanks broke down under the Roman attack, they were pressed against the Carthaginian center which also collapsed. Most of the Carthaginian army was either killed or captured, and Mago as well as Hasdrubal Gisgo fled. The Numidian king Massinissa who had fought as an ally in the Carthaginian army decided it was time to switch sides and align himself with Scipio. Spain was firmly under Roman control.
Hannibal, in the meanwhile, had won tactical victories in Italy, but was not able to shift the strategic situation to his advantage. Hasdrubal’s relief mission gave Hannibal hope again, but Hasdrubal’s army was annihilated when it reached Italy. As this was the first battle victory the Romans had won in Italy after twelve years of war, their celebrations were somewhat less than dignified: Hasdrubal’s head was cut off, carried through Italy, and hurled into Hannibal’s camp.
Now Rome was ready to deliver the killing blow and beat Carthage at her home soil. An army was sent to Africa, and of course Scipio Africanus – freshly elected consul at the age of 31, much too young by regular Roman standards – was selected as the leader of this army.[1]
Scipio landed in Africa in 204 BCE. He took the city of Utica and defeated a Carthaginian army under Hasdrubal Gisgo. Afterward, Scipio offered generous terms and entered peace negotiations with the Carthaginians. However, Hannibal had left his camp in southern Italy now and returned to Africa – for the first time since he had been a little boy. The Carthaginian fighting spirit returned with Hannibal. Everything was set for the climax of the war.

The most popular game on the battle of Zama (by Larry Baggett/Wayland Grace) was originally published in Strategy & Tactics magazine. It was later republished by Decision Games.

Hannibal’s army met Scipio’s in October of 202 BCE. Neither commander had ever lost a battle. Their armies were roughly evenly matched (with a slight numerical advantage on Hannibal’s side), but for the first time, the Carthaginians had the advantage in infantry, whereas the stronger mounted troops fought on the Roman side (thanks to Massinissa’s Numidian cavalry). Although the two greatest commanders of their time met, the battle was no display of tactical ingenuity. Hannibal had his elephants attack to create holes in the Roman lines to exploit for his superior infantry. The Roman and Numidian cavalry drove off the Carthaginian riders, but were led away from the battlefield in their pursuit. The infantry battle went on as bloody as it was indecisive. When the Roman and Numidian cavalry returned to the battlefield and took the Carthaginians in the rear, Hannibal suffered his first battle defeat. The Carthaginian assembly decided to sue for peace – supported by Hannibal. The following year, the war ended. Carthage lost her Spanish possessions for good, was forbidden to have more than ten warships, had to pay a large sum of silver over fifty years, and, most importantly, was forbidden to raise an army or make war without Roman permission. Proud Carthage was essentially a Roman client state.

Scipio returned to Rome a hero and was given the additional cognomen Africanus to honor his victory in Africa. However, he had grown too big for Rome. Whole cities and regions in Spain and Africa regarded him as their protector. As both Fabius Cunctator, the Delayer, and Marcellus, the conqueror of Sicily, had died in the later years of the war, no other politician could even remotely match Scipio’s glory as a commander. Scipio did not press for any kind of monarchical predominance in Rome, but him being without peers left the more conservative Romans uneasy. 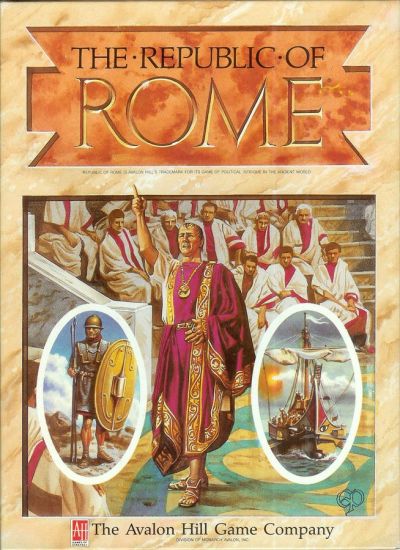 The box cover of The Republic of Rome (Richard Berthold/Don Greenwood/Robert Haines, Avalon Hill) already alludes to the political conflict when one noble gains predominance (note the purple toga similar to that of a general celebrating a triumph) by military means (soldier and ship to the sides of the central figure).

While it is not strictly a game about Scipio, The Republic of Rome (Richard Berthold/Don Greenwood/Robert Haines, Avalon Hill) is a tremendous simulation of Roman politics. The players must collaborate – otherwise, Rome will collapse under its external enemies. However, they will watch each other enviously lest no one grows too influential among his peers. The situation after the Second Punic War with Scipio as the last and only man of great standing would certainly be enough to give the other players fits!
Hannibal remained Carthage’s supreme general, even though the city had no war to fight. In 196, he took over the sufeteship (the most important civilian office in Carthage). Hannibal was an energetic reformer who aimed to increase the role of the Carthaginian people in politics. The old elite opposed his reforms, but Hannibal was immensely popular with the common people. Economically, however, there could be no doubt about Hannibal’s success. Carthage recovered at an amazing pace, well enough to offer Rome a payment of the entire silver for the remaining forty years at once in 191. This, however, was past Hannibal’s time as a sufete. As he had been more successful in one year of peace than in 20 years of war, Rome grew anxious and demanded he be removed from his post in 195. The Carthaginian conservatives took the opportunity to get rid of their unloved reformer and forced Hannibal into exile. He fled to the Seleucid king Antiochus III.
Antiochus was no friend of Rome’s. He prepared for war. Now that Hannibal was at his court, Scipio’s political stock in Rome rose again.[2] He was elected consul for 194. Scipio went east to settle the conflict with Antiochus. There, he allegedly met Hannibal, and for the first time the two rivals were face to face. During their dinner, Scipio asked Hannibal who he thought was the greatest general of all time. Hannibal named Alexander the Great. And the second-greatest? Hannibal named Pyrrhus of Epirus, who had fought the Romans about a hundred years earlier. And the third-greatest? Hannibal named himself. Scipio, who had probably been trying to get a compliment out of his rival, laughed and asked, “And what if you had beaten me?” – “Then, Scipio, I would rank myself ahead of Alexander and Pyrrhus and every other general.”
The Romans were not in the mood for banter. When the war against Antiochus broke out, Scipio went with an army into modern-day Turkey. However, he fell ill, so his deputy Gnaeus Domitius Ahenobarbus commanded the army in the crushing victory over the Seleucids at Magnesia. The conservatives in the Senate recalled Scipio to Rome. Hannibal, on the other hand, had to flee once more and led a peregrine life searching for a place to stay.
Back in Rome, Scipio was accused of collusion with Antiochus. The rising star of the Senate conservatives, Cato, led the trial against him. Scipio, deeply hurt in his pride, reminded the Romans of his great merits and achievements. Then he ripped up his records, saying he did not need to prove anything. The court acquitted him, but with the records gone, it was impossible to confirm his innocence. One year later, in 183, Scipio died in virtual exile. The same year, Rome demanded from Hannibal’s current host, the king of Bithynia, to hand his guest over. Hannibal committed suicide by poison.

For an engaging account of not only Hannibal’s life, but also the larger Barcid family history and their political and military machinations, see Hoyos, Dexter: Hannibal’s Dynasty. Power and Politics in the Western Mediterranean, 247—183 BC, Routledge, Abingdon-on-Thames 2003.
The best Scipio biography is still Scullard, H.H.: Scipio Africanus. Soldier and Politician, Cornell University Press, Ithaca, NY 1970.

1. It is worth mentioning that the decision to attack Carthage while Hannibal was still in Italy was by no means uncontroversial. Fabius Cunctator, the savior of Rome after Cannae, was one of the many opponents.
2. Nevermind that Hannibal’s counsel was rarely heeded at the Seleucid court. Mostly, he was just ignored there.