Welcome to the fourth installment in my series Century of German History! Every post in the series sheds light on a focal event of German history in the 20th century and illustrates this event with precisely one board game. You can find the three previous posts here, here and here.
Today, we look at the foundation of two German states in 1949. After the end of World War II, Germany was in ruins – materially and ideologically. While the Allies attempted some cooperation initially, they soon found themselves at odds and the three Western occupation zones and the Soviet occupation zone developed differently. The board game through whose lens we’re looking at these crucial times is Wir sind das Volk! (Richard Sivél/Peer Sylvester, Histogame).

There was no German state authority left at the end of World War II. The victorious Allies divided Germany in four occupation zones – in addition to the zones for the Great Three of the War, the Soviet Union, the United States, and the United Kingdom, a French zone was created on the insistence of the British (who feared that the US might pull out of Europe and then leave them to fend alone with the Soviets). Four military governors were responsible for their respective zones. Decisions important to all occupation zones were to be made jointly in the Allied Control Council.
The Allies faced urgent problems: As no German state existed anymore – and the previous Nazi one was fully discredited – they had to build a political order from scratch, from the municipal to the national level. Millions of displaced persons and prisoners of war moved and were moved through Germany. And from the ruins and the destruction of war an economy had to be created which should balance the Allied demand for reparations, their need to feed and supply the Germans, and potentially reintegrate Germany into a wider economy and rebuild some of her former prosperity (if only so that the Allies could extract reparations and the Germans could pay for their food imports themselves instead of relying on Allied shipping).
The four Allied powers already used different approaches in the beginning, but their differences did not yet run along East-West lines: 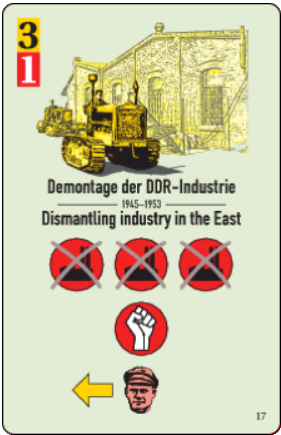 The Trauma of 1941: Building Socialism in the Soviet Zone

None of the four occupying powers had suffered as much from World War II as the Soviet Union. The Soviet Union was the only one of them which had fought a prolonged war on her own territory, and she had paid dearly for it. Most of her population and industrial centers in the west of the country had been overrun, occupied, and pillaged by Nazi Germany. Some 20 or 30 million (no exact number is known) Soviet soldiers and civilians had died in combat, under the occupation, or in prisoner-of-war or forced labor camps. Therefore, the top Soviet priority after the war was to ensure security from another attack from the west.
For that purpose, the USSR shifted her own borders further west and annexed German East Prussia and some territories in eastern Poland (for which Poland was compensated with the German territories of Silesia and Pomerania). Then the Soviets created a curtain of Soviet-aligned states between her and Germany which would act as a buffer in case of another war. And, ideally, Germany herself would be Soviet-aligned as well, so that no threat could come from her. Therefore, the USSR began transforming her occupation zone into another Soviet-friendly satellite state. 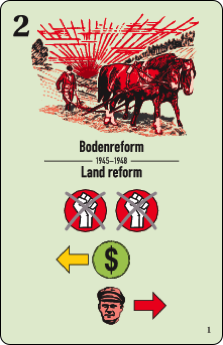 This was not immediately apparent. When the Soviets built their new local administrations, they picked politicians from a wide range of political affiliations – Communists, sure, but also Social Democrats, Liberals, and Christian Democrats (although the Communists tended to occupy key positions like those for domestic security). And even ambitious undertakings – like the land reform which expropriated the owners of large estates, the Prussian Junker, enjoyed broad support among the political left and center (although the following collectivization of the agricultural land after the Soviet model hurt productivity).
Yet, ultimately Moscow wanted power to be in Communist hands. A first step in that direction was the forced merger of the Communist Party (KPD) with the Social Democratic Party (SPD) in the Soviet occupation zone. The new party was euphemistically called Socialist Unity Party of Germany (Sozialistische Einheitspartei Deutschlands, SED). The measure was extremely unpopular with the Social Democrats – those of West Berlin voted against the merger in a landslide of 82% of No votes, but the Soviet military administration did not allow for a vote in the Soviet zone. The merger eliminated the strongest political competition and made the SED the leading working-class party of the Soviet zone.

The forced merger of KPD and SPD produced a unified working-class party loyal to the Soviet Union (gains in economy and socialism, top and bottom icons). However, the move alienated many Social Democrats from the new leadership (unrest icon in the middle). Image from Wir sind das Volk! © Richard Shako, Histogame, CC-BY-SA.

Three Zones to One State: Integrating Germany into the West

Initially, the three Western Allied powers did not pursue a unified Germany policy, as they had very different political goals. France’s plans were closest to those of the Soviet Union: After three disastrous wars against Germany in the last 80 years, she wanted security from German aggression, which was most easily achieved if Germany was to be weak. The United Kingdom, on the other hand, was much more worried about the threat the Soviet Union posed now as a potential European hegemon, especially, if Germany might throw in her lot with the Soviets. Therefore, the overarching British goal was to keep Germany from becoming Soviet-aligned. Lastly, the United States began withdrawing from Europe after the war was over, following her old tradition of isolationism. Initially, Germany was not quite on the American long-term agenda.
However, the Americans and British soon found common ground in their shared burden of supplying their occupation zones with food. Starving the Germans would have – aside from the humanitarian aspects – posed the risk of uprisings (be they in the form of a Nazi resurgence or Communist advances), but as long as the German economy was in shambles, the Germans could not pay for these supplies. So the Anglo-American powers aimed for a newly prosperous Germany, and, as a first step, joined their occupation zones economically (ruling out the alternative of a four-power solution for all of Germany). France was unenthusiastic about measures which would make Germany richer and more powerful. In the end, the French did join the Anglo-American project – lest they be left on their own, and because the intensified Western cooperation ensured dividing Germany into a Western and Eastern part, so that France would not have to deal with a unified Germany. The most important economic measure in the Western zones was replacing the Reichsmark (which was worthless by now) with a new currency (the D-Mark). Commercial activity, which had before been limited to bartering and black-market trades, suddenly resurged, and the increasing prosperity also lifted the spirits of the Germans in the Western zones.

The Western Allies extended the monetary reform also to their sectors in Berlin. The USSR, which regarded Berlin in its entirety as a part of her zone of influence, responded by blockading West Berlin, which was an „island“ within the Soviet occupation zone, in the hope of gaining concessions in West Berlin or West Germany. The Western Allies supplied Berlin from the air for almost a year – a stupendous logistical feat, and a moral victory which increased their popularity with the Germans immensely. When the blockade was lifted in May 1949, the road for a West German state was cleared. On May 23, the parliamentary assembly of the three Western zones adopted the provisional constitution which they – under the supervision of the Allied powers – had drafted. A new German state was born – the Federal Republic of Germany. Now the division of Germany was irreversible. Five months later, the German Democratic Republic was founded in the Soviet zone. Like in the 19th century, German unity was once more not a statement, but a question. 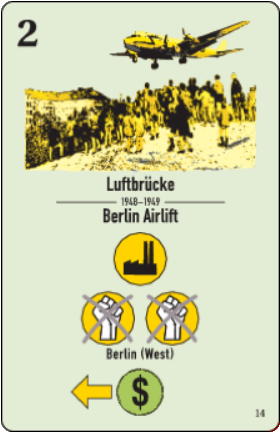 The Berlin Airlift steeled West Berliners’ fighting spirit and turned them into stalwart supporters of the Western powers (reduction of unrest in West Berlin, middle icons). The Western economic counter-blockade against the Soviet zone of occupation hurt them more than the Berlin blockade hurt the West (loss of Western currency for the East, lower icons). Image from Wir sind das Volk! © Richard Shako, Histogame, CC-BY-SA.

The disagreement over Germany destroyed the wartime alliance – and thus launched the Cold War. Yet the division was not inevitable. All four Allied powers shared the responsibility for the division, which they tacitly accepted as a side effect of their respective policies – be that France’s and the Soviet Union’s security needs or the British and American quest to lessen their burdens of occupation. While the division was one of the major open questions of foreign policy for the next decades, it was not entirely bad – at least for the West Germans, whose political and economic integration into the West was invaluably helped by the Soviet Union overshadowing them as a security threat to the Western European countries. Forty years later, Germany was reunited. But that is a story for another post. 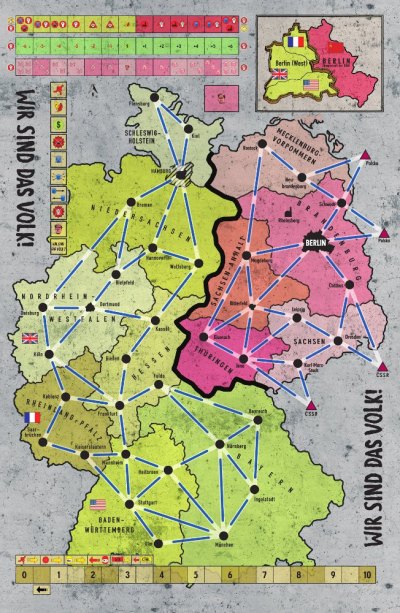 See that thick black line between the purplish and the greenish areas? – That’s the division of Germany for you. Board of Wir sind das Volk!, ©Histogame.

15 thoughts on “A New Start – and Two New Germanies (Century of German History, #4)”

Follow Clio's Board Games on WordPress.com
Join 1,357 other followers