Welcome back to the seventh installment in my series on board games about the Cold War! Today, our game will be Wir sind das Volk! (Richard Sivél/Peer Sylvester, Histogame). As usual, we’ll look at it in both game and academic terms. There are three aspects of Wir sind das Volk! which stand out to me: Its primacy of domestic politics, the decision-making aspect of the special cards, and the strong asymmetry of its two powers.

What kind of Cold War is this?

Wir sind das Volk! deals with the Cold War in Germany from the end of World War II to the fall of the Berlin Wall (which might or might not happen in the game). Two players take on the roles of East and West Germany competing over economic productivity, standard of living, and international prestige.

Lots of Cold War games focus on the international part of the struggle – the diplomacy, the espionage, the military buildup. Wir sind das Volk! has some of those aspects as well – there is surely no dearth of card events about treatises and agreements. Yet the focus of the game lies elsewhere: Political participation and material wealth of their citizens, not security, are the issues over which players fight the most. Not only is the base of the game its economic system (the action players will take most often is to build factories and connect them with infrastructure), this economy is also clearly geared toward consumer goods. The production of jeans and personal computers brings bonuses, whereas tanks or planes are absent.

The Eastern economy (triangle-shaped factories and the connecting infrastructure) has been built up. Now might be the time to let the people indulge in the fruits of their labor and even allow them to make and wear those American cowboy pants they yearn for (card event gives living standard (blue prism), reduces unrest (crossed-out fist) and increases Eastern prestige (arrow with oak leaves). Image from the Boardgamecore client of the game.

An economy which produces winners also produces losers. Especially East Germany will have trouble keeping up. The import of consumer goods might pacify a populace enviously looking west, but if those imports cannot be paid for in hard currency earned by exports, the lack of economic investment will send the economy into a downward spiral – an even less competitive economy, even more of a trade deficit, even less capital available for maintenance, and so on. Eastern rulers who want to buy their people’s allegiance with TVs and meat might find their economy in shambles and themselves forced out of office by a sudden national insolvency. The perfect course for the Communist rulers of the East, therefore, is to gently run down their economy and just make it over the finish line after four decades of struggle – one minute before their factories would fall apart if somebody in the general vicinity sneezed.

Trials against Nazi criminals? Unrest in the West (yellow fist icon)! Card Frankfurt Auschwitz Trials, CC-BY-SA Histogame/Richard Shako.
So, if playing East Germany is a tightrope, the Eastern player might fall on one side into the chasm of national insolvency, but on the other into the abyss of mass protests. Those citizens are a fickle and prickly lot, as easily offended as the average Twitter user. You force their preferred working-class party to merge with yours – and they protest. You strip some popular but rebellious musician of his citizenship – and they protest. Heck, even when all you do is to bring legal action against the Nazi criminals – they protest. And when they protest, the entire province is shut down for economic action (general strike, apparently). But the worst part about protests is that once you have gathered four of them (whose markers form a neat little sentence, either „WE ARE THE PEOPLE!“ or „NO POWER TO NOBODY!“, referring to the rallying cry of the East German protesters of 1989, and a slogan of the 1968 protests in West Germany, respectively) – you lose. As simple as that.

The people have spoken: WIR SIND DAS VOLK! (don’t overlook the “DAS” marker in the Eastern part of the Berlin box in the upper right corner). East Germany collapses under the weight of the mass protests. Image from the Boardgamecore client of the game.

While your actual opponent sits on the other side of the Berlin Wall (or the open border between the Germanies, more on that later), your own populace is at least their potential accomplice. Sometimes, these plucky citizens even place themselves entirely out of the neat bipolarity of the Cold War (which is a myth anyway) and rebel in both countries at the same time – so all you wonder about in your neat government office is if you benefit from keeping the general situation calm, or if you should stoke the fires of discontent in both countries. 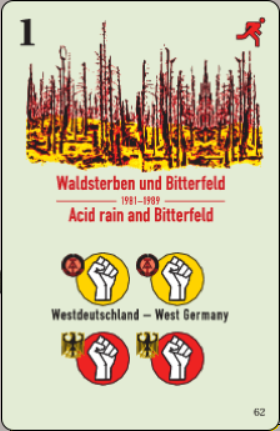 In case you missed it: Yes, Wir sind das Volk! does not feature any troop movements. But also, yes, it is a highly competitive and antagonistic game. In the words of designer Peer Sylvester: It is a wargame without war (and one of my prime examples why we should move away from the narrow label „wargames“ and instead embrace „historical conflict simulation”).

History-themed games are media of alternative history. However, unlike books or movies, games give their consumers (the players) agency. That makes games uniquely suited to one particular historical insight alternative history can provide: Players can improve their understanding of the decisions made historically. Board games usually take this to the logical extreme: Players make a decision with every little move, and the quality of this decision-making is so incremental that it might dilute the experience of being in the shoes of a decision-maker. Not so Wir sind das Volk!. Once in each of the four decades, East Germany needs to make a really big decision: A special card which can only be triggered by the East allows for a decisive policy shift (and forgoing this shift is a big decision in itself as well):

It’s no foregone conclusion if you decide for  or against taking the special event. Of course, you might have preferences – calling the Soviet tanks usually does more harm than good in the long run, for example – but there might be situations when you have to change course (say, when you are awash in unrest already by the first decade and can barely build a new road because whenever you put a shovel in the workers‘ hands, all they do is knock you over the head with it).

East is East, and West is West: Beyond the Black Box of the State

Many Cold War games treat their protagonist states as black boxes – they receive input, they react with output, but their interior is unknowable. That runs the risk that it doesn’t matter if you play a liberal, capitalist democracy or a authoritarian, planned economy „people’s democracy“, for you will feel no difference. Wir sind das Volk!, however, rips the black box open and shows you all its intricate mechanics: East Germany has to pay for its standard of living with exports (or, as the authors put it, all the „inhuman creativity“ the rulers mustered – from „selling“ political prisoners to the West to taking West Berlin’s toxic trash for a fee). The Eastern state suffers from their malcontent citizens fleeing to the West, but the remaining rabble-rousers can at least be dealt with by state-run repression – a resort that the democratic West lacks. Socialism can mobilize the Eastern citizens, but they can also grow disillusioned from it and abandon any ideological loyalty. The West, on the other hand, can poke the East via showcasing its wealth in West Berlin, but the city is also surrounded by East Germany, entirely dependent on West Germany proper for its standard of living, and vulnerable to unrest.
The assessment of the Cold War in Germany which Wir sind das Volk! makes is complex, and it especially sheds light on the Eastern part of it (West being more of a „default“ power, East being the one with more special rules). Events and mechanisms relate to the political and economic shortcomings of East Germany, but they also try to explain why East Germany behaved as it did (built the Wall, spied extensively on its own citizens, etc.). That’s no small order, and Wir sind das Volk! does pretty well at it. Among the Cold War games, I bestow on it the title of The Most Nuanced.