I’m doing a series on German history in the 20th century on my blog this year. In intervals of 10 years, I pick a crucial event and explore it – with the help of precisely one board game. You can find the previous posts here:

Today, we go back to 1969, when Willy Brandt took office as chancellor of the Federal Republic of Germany, and the policy of détente across the Iron Curtain he implemented then. Here, the „German question“ of reunification merged with superpower détente into détente between West Germany and the Soviet Union as well as her allies in Eastern Europe. And when it comes to matters of détente and confrontation, our accompanying game can be no other than the famed Twilight Struggle (Ananda Gupta/Jason Matthews, GMT Games). If you are interested in Brandt’s life beyond détente, check out one of my very first blog posts on exactly that matter.

Germany was divided into occupation zones by the victors of World War II. From these separate zones, two separate German states were founded in 1949 – liberal West Germany and communist East Germany. The frontline of the Cold War ran right through Germany. It was widely believed, however, that this was only temporary and Germany would be reunited soon.
Initially, the West German policy in regard to its Eastern sibling was one of strict non-interaction, going so far as to break off diplomatic relations with any country which recognized East Germany. 20 years after World War II, the unification of Germany had not come any closer – even the contrary, as the Soviets had shifted their stance from pondering a united neutral Germany to firmly supporting East Germany. 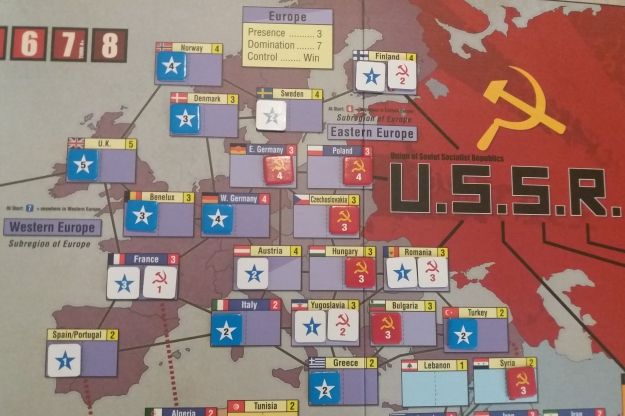 The blocs in Europe. The dividing line between blue and red runs right through Germany. Detail of Twilight Struggle board during a game.

In 1966, the Social Democrats entered the West German government for the first time (as the junior partner to the Christian Democrats who had ruled since the founding of the country). Their leader, Willy Brandt, became foreign minister. Brandt introduced a new approach to East-West relations which he dubbed „change through rapprochement“ (Wandel durch Annäherung). As the name suggests, Brandt wanted to intensify and improve the relations with the countries behind the Iron Curtain and thereby also effect changes in their policies.

The Dialectics of Superpower Détente

Brandt’s new stance was in line with the spirit of the times. The Cuban Missile Crisis of 1962 had brought the world closer to a war between two nuclear powers than ever before. This experience proved to be sobering for both the United States and the Soviet Union. The superpowers thought better of their policies of confrontation and brinkmanship which had increasingly characterized the nuclear diplomacy of the times. As a first step, they agreed on a nuclear test ban in 1963. The corresponding card in Twilight Struggle is rarely played for the event (the 4 Ops are just too juicy), but in some situations it can truly save you from an imminent DEFCON loss. 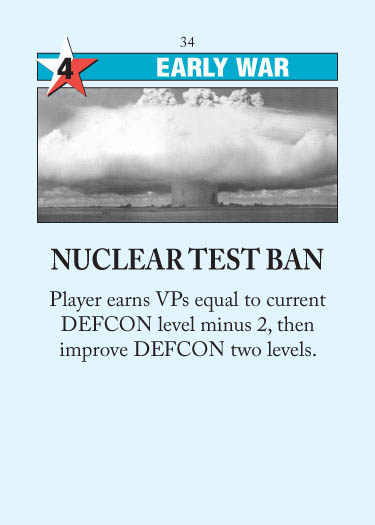 4 Ops? Awesome. But the event usually gives you no VP at all, and raising DEFCON lets your opponent coup first before you reply. However, should you be riddled with a DEFCON suicide card that you cannot get rid of any other way, Nuclear Test Ban can be all that stands between you and a world of ashes and fallout. Image ©GMT Games.

Both superpowers used détente mainly as a strategic means of defense: They wanted to free up their finances, manufacturing, political mobilization, and military readiness, instead of pouring all those resources into the ever bigger apparatus for a potential nuclear superpower war. The United States were engaged in a local hot war in Vietnam since 1964, and as the conflict went on, it became ever more obvious that America could not win it. The Soviets faced less obvious, but in the long run more troubling challenges. The arms race with the United States was a heavy burden on the much less productive Soviet economy, and since the Sino-Soviet split, a hostile China threatened their position in northern Asia. Both superpowers also faced domestic unrest which they wanted to pacify with foreign policy successes guaranteeing stability and peace (and, in the case of the Soviet Union, also with increased spending on consumer goods).
The United States‘ détente strategy was not purely defensive, though. Conceived by the joint minds of Richard Nixon and Henry Kissinger (possibly the most dynamic foreign policy duo of the 20th century), the American strategy aimed at positioning the US at the sweet spot of the American-Soviet-Chinese triangle, so that the Sino-Soviet conflict would be more pronounced than either Soviet-American or Sino-American differences. For that, the US needed détente with both the Soviet Union and China. And thus Richard Nixon, a man with stout anti-communist credentials, made treaties with the Soviet Union, and even more surprising to his contemporaries, flew to Beijing in 1972. 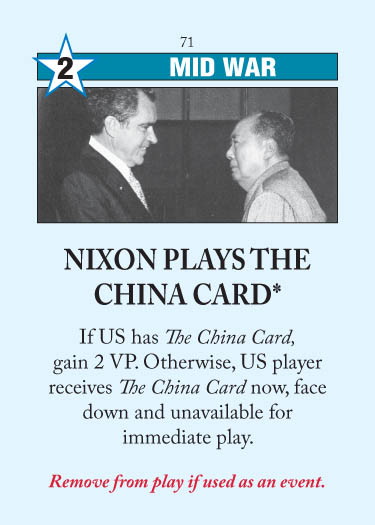 Only Nixon could go to China. The shake-up of the ideological alliances was immense – and made a corresponding cultural impact. There is even an opera about Nixon’s trip to China! Image ©GMT Games.

After border tensions between the Soviet Union and China had flared up in 1969, the Soviet Union was ever more willing to pursue détente with the West. In addition to their negotiations with the United States (which Nixon and Kissinger wanted), that meant an improved understanding with Western Europe (much to the dislike of Nixon and Kissinger, who preferred their allies to keep putting pressure on the Soviets). 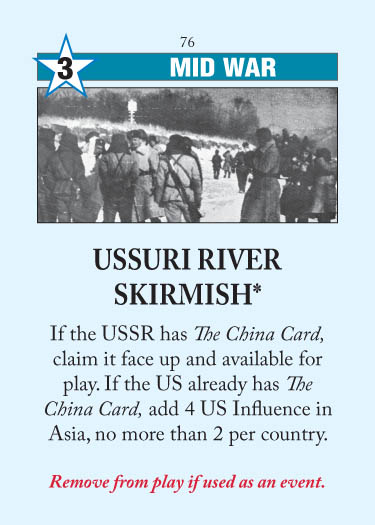 Frenemies: While Soviet Union and China both supported North Vietnam in the Vietnam War, they also rivaled each other over who was to lead the socialist world. Hostilities with China (culminating in a bloody border clash at the Ussuri in 1969) severely weakened the Soviet position in Asia. Image ©GMT Games.

As Brandt had already pursued détente with the East during his tenure as foreign minister from 1966 on, Soviet general secretary Brezhnev hoped he would win the chancellorship in the elections of 1969 and become a reliable negotiation partner. As a little election campaigning help, the Soviet Union offered more cooperation with West Germany a few weeks before the elections, giving Brandt a welcome policy success on which he could run. And indeed, Brandt won and became the USSR’s new favorite partner in the West, „to the chagrin of the French and the irritation of the Americans“ (Marshall, p. 68). Brezhnev developed a strong personal relationship with Brandt (even closer than with Nixon, whom he found indispensable to superpower détente, but with whom he probably would not have vacationed at his summer dacha on the Crimea).
Helped by this connection with Brezhnev, Brandt concluded treaties which eased the tensions between Germany and the victims of her aggression in World War II (the Soviets, Polish, and Czechoslovakians), as well as very practical improvements to the relationship and the flow of people and goods between the two German states. On the other side, the Soviets gained international standing, recognition of the post-war order they built, and an improved relationship with one of Europe’s larger countries – represented on the Willy Brandt event card by the 1VP and the 1 influence the Soviets gain. Contrary to the card event, however, Brandt never questioned Germany’s membership in NATO. 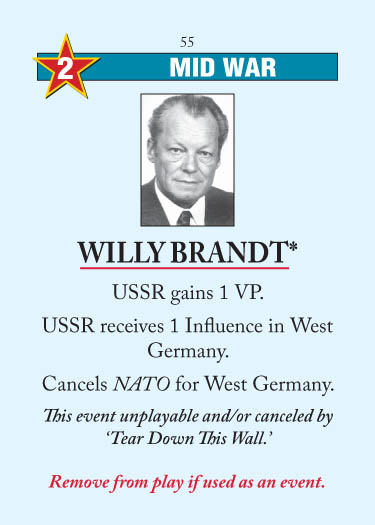 Brandt’s conciliation with the East was the groundwork for an independent German foreign policy. Image ©GMT Games.

6 thoughts on “Willy Brandt and Détente (Century of German History, #7)”