After a break in 2018, I’ve been back to SPIEL in Essen this year – the largest board game fair in the world. I spent two days there, which, as I’m more and more convinced, is the ideal amount of time for me. I get to check out (almost) all games about which I am particularly interested. The only way I could see myself staying longer is if I went with a larger group and/or did some gaming in the evening after the fair.
I’m also content with the time planning – I had two pre-reserved games, went to two more first thing in the morning to secure a seat, and except for that, it was a mix of going to the booths of publishers/games I particularly wanted to visit and, especially late in the day, just strolling with open eyes and sitting down wherever there was an open table with an interesting-looking game.
As for the games themselves, it was a pity that two of my most anticipated games could not be played at the fair: Europe Divided (Chris Marling/David Thompson, Phalanx Games) did not get ready in time, Watergate (Matthias Cramer, Frosted Games) was apparently too old already – Frosted Games focused their play tables entirely on their new release Cooper Island (Andreas Odendahl, Frosted Games) and had the few-months-old Watergate only on their shelves for shopping.
As for shopping: I did in fact not buy a single game at the fair. When I think about how many great games I have at home which are not played often enough, a new game must be something really special. One game, however, came close (see below). 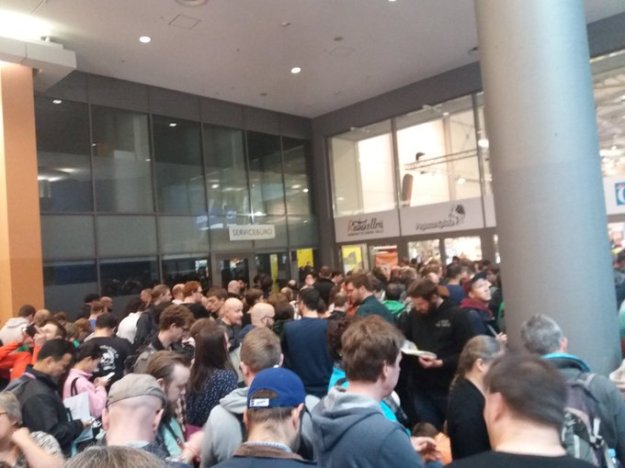 The crowd is ready to enter (around 9:30 on Thursday).

Here are some of the games that I played and liked at the fair:

A cooperative game in which you try to build a functioning human settlement in the aftermath of extreme climate change, staving off small nuisances (say, honeybadgers of unusual size on your field) and larger environmental threats. Cooperation is also deeply ingrained in the mechanisms: You draw the tiles that you use for actions randomly, but most of them are character-specific. So if the organiculturist draws a tile from the engineer, she’d have to exchange tiles with him to make the tile usable. The rules are picked up quickly (didn’t take more than a few minutes of explanation) and the pace of the game feels right – just the amount of things you can handle at the same time. Unfortunately, we couldn’t end our game as we had another appointment. Climate Oasis is likely to be released in 2020.

The market of threats and the game box.

Just the night before I played this at the fair, Francis Tresham had passed away. He’d been an immense influence on game design, inventing both the 18XX genre of railway/investment games and that of civilization games. I think our playing of the game after his death is the appropriate compliment to him as a designer, and a testament to his design legacy. I’d been very interested in the game before the fair, so I really appreciated 999 Games’s option to reserve a time slot for playing beforehand. Flo de Haan, who’s been responsible for the recent Civilization board games in Tresham’s footsteps, acted as game explainer (an excellent one!) as well as the king of the mighty Assyrians. My Minoans had to spread out from their tiny island of Crete to settle the Greek mainland, and later, Sicily. To me, the two most exciting things about the game were, first, the fine balance one has to strike between population growth (to spread over the board and pack a punch in conflicts) and founding cities (for trade goods, and therefore prosperity and progress), and, second, the wild free-for-all trading phases („Anyone has iron or copper? Iron or copper? – Ah yes, I could offer you wine for that“, sneaking a calamity card into the trade). As the full game would last around twelve hours, we only had a teaching session of 90 minutes. I found the game exciting, but reserve judgment if the – rather straightforward – mechanisms would hold up for a full day of gaming.

My Minoans (green) have settled Sicily, acting as a peacekeeping force between Carthage (orange) and Rome (pink).

Our last game of Thursday in Essen, and a pretty good one to finish a day. Every round, you draft one of the roles from the Tinker, Tailor, Soldier, Sailor… nursery rhyme and then – of course in the sequence of the rhyme – perform your action, usually taking money and/or goods from the market. Money can buy you more goods, and you’re aiming to collect sets of one from each good as well as large sets of specific goods. The light mix of card drafting, set collection, and a tiny bit of take-that (or, rather, give-that, as your aggressive moves are normally to steal from another player) comes together in a tight little game that can easily be taken for travel, to a pub, or to pass time in trains or airports after leaving a game fair.

Silly me did not take a picture of our game, so here’s the box cover instead. Image ©Medusa Games.

Terraforming planets has been en vogue recently. Cassiopeia lets you terraform not only one, but seven of them – provided you have the right resources, gained through employing the respective specialists. All specialists have different roles on their front- and backsides, and the question when to turn them over to perform a different role leads to juicy tactical decisions. Similarly, all planets change their logistics alignments (Earth or Mars) once terraformed, and matching the majority of your planets with the current position of the logistics base gives you bonuses. The rest is tightly designed resource and action optimization. Cassiopeia‘s most outstanding feature, however, is the gorgeous artwork, especially on the specialist cards.

Planets getting in line to be terraformed.

The game at the fair which I enjoyed most, however, was…

Not a new game (released in early 2018), but I’d never played it before. We tried to get a seat for it during Thursday afternoon, but the table was always crowded, so we made it our priority for Friday morning – I proposed checking out Die Macher (Karl-Heinz Schmiel, Stronghold Games) instead, but my friend A. was somehow more interested in cute animals fighting over a forest than in German party politics – what an oddball! Anyway, as we had gone to a lot of games I’d been interested in on Thursday, we decided for Root, and it was an excellent choice. At this point, everyone who is cooler than me in the boardgaming world (so, everyone in the boardgaming world) has already played Root and written about it, so I’ll be brief: Yes, it looks cute, but it is a cutthroat strategy game. Yes, it is extremely asymmetric and you basically get four games in one box (one per faction). And yes, it is wildly fun. 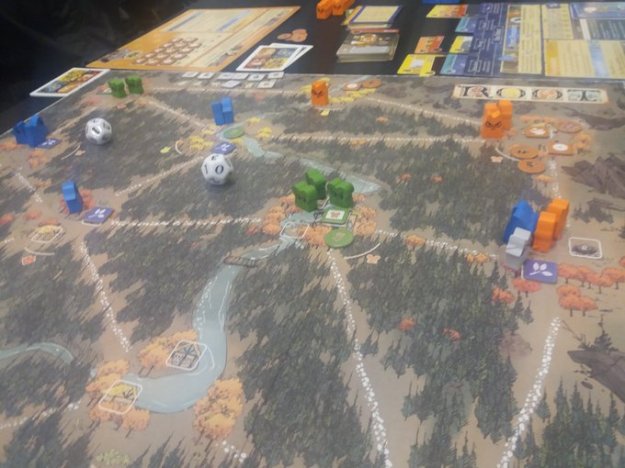 The Cats (orange) have lost most of their presence on the board under the attacks of the Birds (blue). The Woodland Alliance (green) have taken advantage of that and set up their own base in the middle of the forest. The Vagabond (white, center right) has kept out of all trouble so far.

In our game, the Birds started extremely aggressive (pushed by the ever-escalating promises of their leader) and beat the crap out of the Cats. The Woodland Alliance guerillas used that power vacuum to expand their presence. My Vagabond picked up a few items and curried favor with both the Cats and the Woodland Alliance. We gave up the table to other interested gamers at a point when the Birds would have collapsed under the weight of their promises and the Vagabond was ready to join the fighting.
The biggest downside of the game to me is that it works best with four players, and that’s a player count I rarely have. The playbook, however, also lists interesting options for play with three factions (at two, I guess the interaction is too straightforward for my taste), so I might reconsider and give in to Root.