I do Top Threes in various categories as my end-of-year posts. So far, I have done this year:

And here, finally, is the pinnacle of Top Three posts for the end of the year – historical board games! That’s what you’ve come for. So, without further ado, here are the three history-themed board games with which I had the most fun I this year:

It’s been 14 years since Twilight Struggle was published, and five years since I first played it. Back in 2014 I played it with everyone who didn’t run away fast enough, but over the years, my plays got ever more infrequent, until in 2018, I didn’t play a single game of Twilight Struggle. But boy, did it make a comeback for me this year! I’ve played more than a dozen games (and counting) – helped by the excellent digital version made by Playdek: That allows me to play asynchronously against Dave from the Dude! Take Your Turn! blog (check out the blog if you like board games!), even though he lives on the Pacific Coast and I in the heart of Europe. 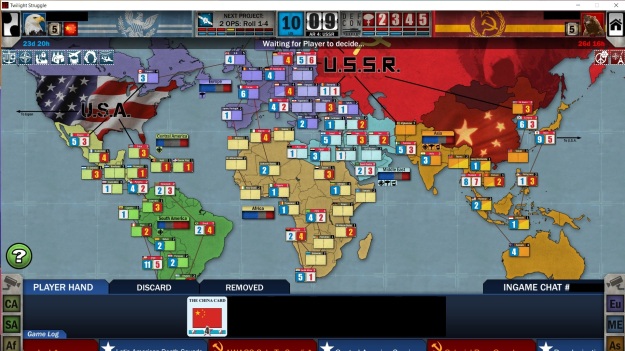 The United States is preparing the final push. Cards in hand are blacked out for secrecy – General Secretary Dave has the KGB watching this blog! Image ©Playdek.

And Twilight Struggle is still as good as it ever was. 80% are strategic planning, the remaining 20% strategic risk management – without which a game could, in my opinion, never be fully strategic. And so you look at the plethora of opponent events you have in your hand of cards this round and try to make it work. „Well, maybe if I cut losses in Central America early before it gets worse… and play Brezhnev Doctrine only as my last card so its result is minimal… then I could stand a chance to at least hold my own in South East Asia…“ – and as your opponent is normally in the same situation, unexpected boons might arise – they are forced to play Ussuri River Skirmish, and suddenly you are on the offensive in Asia! It’s chess, poker, and tug-of-war at the same time. And I’m glad it’s back in my life.

Last year’s winner makes the list again! And so we have another card-driven game here. (I confess I am a sucker for them.) But while Twilight Struggle is a tug-of-war, in Here I Stand you pull on a rope, another lass pulls at the other end, then a third girl comes over to help you, and finally a fourth bloke blindsides you and runs you over. Turns out, he was running from the fifth lad who has a bet going on with the sixth gentleman. You should have seen it coming. 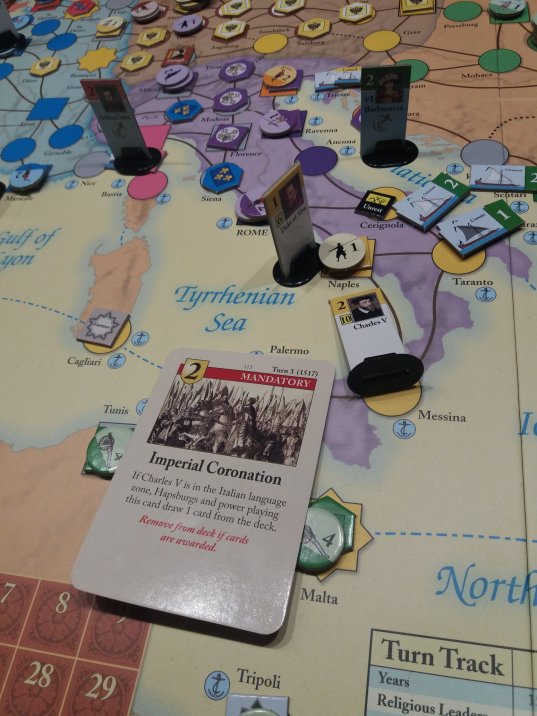 Early modern Europe is a wild place of religious fervor, exploratory daring, military hubris, and diplomatic finesse. Ideally, you have five friends and an entire day for that. And that’s just what I had in January this year. My Hapsburgs did not fare well – they were torn apart between containing France and England and withstanding the Ottoman assault. My only friend, the Pope, was more interested in conquering Italy than keeping the Protestant heretics in check. And so I went down without glory. It was a hoot of a time. – Any game can feel good when you win, but when you get your imperial behind handed to you and still are more stoked for the game than before, it’s truly great. Our next six-player session is already scheduled for next January.

And our winner is…

The third game, the third GMT game. Two possible conclusions: 1. They bought me. 2. Their historical games are really good. You decide for yourself what is more likely.
Unconditional Surrender! did the full sweep this year – it has already won New to Me Game 2019 on this very blog. For my general thoughts on the game – and my currently running detailed after-action report – see here (and, of course, the regular updates on this blog as well as my Twitter). Instead, here I’ll give you some idea how wild a game of Unconditional Surrender! can be – by summarizing my first solo campaign which I ran from January to June this year:
Germany started fairly historical and conquered first Poland, then Denmark and Norway, and by summer 1940, France and the Low Countries. Then the United Kingdom got in trouble in the Mediterranean: Italian forces took Malta, and Turkey joined the Axis! So the British troops had to hold the line against Italy in Western Egypt and against Turkey in Palestine.
For that, they denuded the home islands of armies as well as naval and air cover – and so Germany took a gamble on invading England in May 1941! One month later, Axis forces also invaded the Soviet Union, taking the Baltic coast and Ukraine. The German invasion force in England got bogged down in the Midlands, but when a German army which had traversed Turkey and Iraq took Kuwait from the British, their will to fight on collapsed temporarily – more than enough to allow a full German occupation of the United Kingdom. 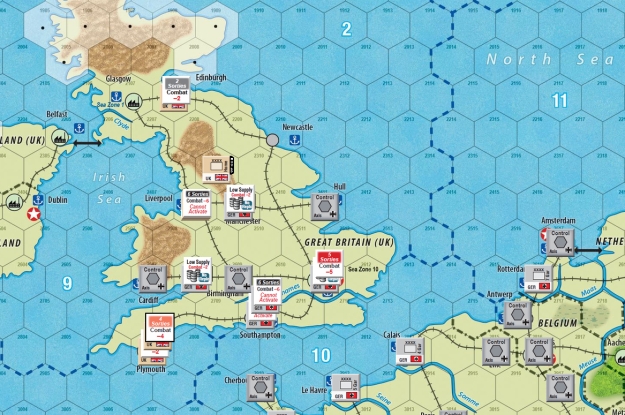 Nazi forces in England! At least they are momentarily bogged down in low supply in the Midlands. Image from the Vassal module of Unconditional Surrender!, ©GMT Games.

While British forces on American ships landed in Scotland in late spring 1942 and liberated the island by early fall, the Axis achieved their greatest operational success on the Eastern Front, cutting off the Soviet armies in the center. By late summer, they made an additional push in the south toward Stalingrad… but there they were met with a fierce Soviet counter-attack, just before the Soviet Union would have collapsed. The Axis had passed their zenith.
In 1943, the Western Allies landed in Egypt and from there took the Middle East and Northern Africa back. Soviet forces raced through Turkey and crossed the Bosphorus thanks to a British landing in Northern Greece which blocked the Germans from reinforcing Istanbul. The Soviet-British Balkans campaign was on.
In April 1944, the Balkans front collapsed when Germany’s minor allies Romania and Yugoslavia were defeated. Right after, the Soviets broke through in Ukraine and threatened to rendezvous with their forces from Romania. The German Eastern Front turned into a wild rout, exacerbated by the Soviet breakthrough in the north. By fall, the front ran through Poland and Vienna. The Western Allies, meanwhile, had kicked Italy out of the war and taken most of the peninsula.
1945 saw the Western Allies landing in France and the Soviets breaking through Pomerania and the Alps. Berlin fell in July, and Germany surrendered in September (netting them a victory as they had survived long enough as prescribed by the game rules).

And which were the historical board games with which you had most fun this year? Let me know in the comments!

5 thoughts on “Farewell 2019 – Historical Board Games”