For hundreds of years, England and France were the fiercest rivals in Western Europe – from the wars of the Plantagenet kings of England to expand their holdings in France, to those of Napoleon against various British-led coalitions, and then the overseas bickering in the Age of Imperialism as when the two powers clashed at Fashoda. However, at one point it seemed as if this rivalry might come to an end and the two countries might be united: 600 years ago, the king of France recognized the king of England as his heir! We’ll find out how this came to happen and why it did not work out – and what happened instead. It goes without saying that you can expect board games on the way.

One of the most storied parts of the English-French Rivalry is the so-called Hundred Years‘ War – in fact a series of wars over a period of 116 years (1337—1453).
A board game treatment of the entire Hundred Years‘ War can be found in Warriors of God: The Wars of England and France, 1135—1453 (Makoto Nakajima/Adam Starkweather, Multi-Man Publishing). The game offers two scenarios, one of them the Hundred Years‘ War, the other the wars between the Plantagenet kings of England and the Capetian kings of France in the 12th and 13th centuries. Warriors of God dares what only few games dare: Some very crucial swings come from randomness, as your army leaders may just die, and then their army is not only barred from taking actions, but is also in danger of falling apart with your opponent snatching up the leaderless forces. We will see more of this dependence on individual leaders in history later. 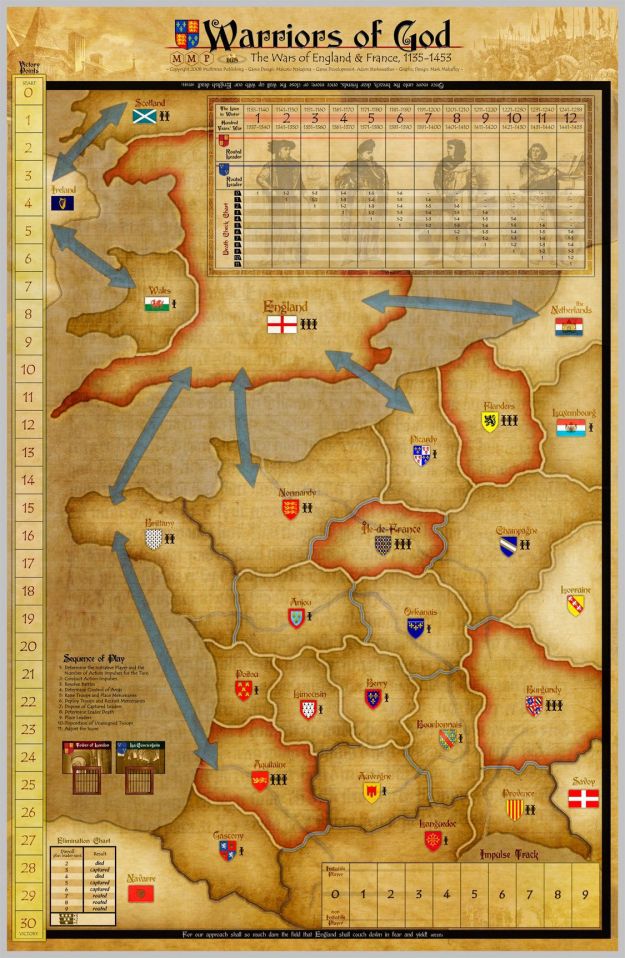 England invaded France for hundreds of years while being comparatively safe itself. Game board of Warriors of God, ©Multi-Man Publishing.

At first glance, the conflicts in the Hundred Years‘ War are united by the English push to have their claim on the French throne recognized – after all, Edward III, the king of England when hostilities began, was a grandson of French king Philip the Fair through his mother Isabella, the „She-Wolf of France“. However, while Edward theoretically held that claim, he did not make much of it until later in the war. Initially, the war was about his Gascony holdings in the south-west of France, because of which Edward was a vassal to the French king. Once Edward (and his son, the famous „Black Prince“) had won some decisive victories (most famously at Crécy in 1346), he decided to go for more – the French crown.
Once pressed, those claims could not be unpressed. And so the kings of England insisted – with various degrees of earnesty – that they were the rightful kings of France up until 1800. By then, the Kingdom of France had already ceased to exist, replaced by the revolutionary French Republic.
Crécy is often seen as the beginning of the end of chivalry. The army of the first realm of Christendom, the Kingdom of France, numerically superior formed around well-equipped knights, fell apart under the arrows of the English longbowmen and the dismounted heavy troops protecting them. Instead of the French feudal aristocracy, English middle-class yeomen were the men of the future. It is not quite as simple. Militarily, the English reliance on archers correlates with the sad state of their finances. Whenever English kings had the riches to raise and pay large numbers of heavy cavalry, they would. Regarding the yeoman archer as a harbinger of a new era, the popular memory of the Hundred Years‘ War in the English-speaking world tends to forget the second phase of the war: In the later decades of the 14th century, the English advance ran out of steam, domestic trouble in England increased, and the French reversed all previous English gains.

Agincourt to Troyes: The Great What If

Enter the great warrior-king of Lancaster England, Henry V. When he became king in 1413, Henry was a highly ambitious man, already experienced in politics and warfare, and yet only 25 years old. He seemed in all regards able to shape an era.

Agincourt looms large in the English collective memory – not least because of Shakespeare’s treatment of it in his play Henry V. “We few, we happy few, we band of brothers” is the most famous quote from the St Crispin’s Day Speech Henry gives before the battle in the play. Image ©Rodger B. MacGowan

His first few years of rule seemed to confirm this impression. Henry went to war with France, and at Agincourt in 1415, won the most complete battlefield victory since Crécy. Once more, the English used longbowmen to their advantage in terrain unsuited for heavy cavalry (a narrow defile only a kilometer wide, and muddy from the autumnal rain). In Agincourt (Richard H. Berg/Rodger B. MacGowan, GMT Games), the French player needs to be extremely wary not to fall into the same trap – it’s all too easy to throw the French forces one after another into a slogging advance on the English line while being slaughtered by the archers!

The Treaty of Troyes does not feature directly in Troyes, but it has an event card “Conflict of Succession”. Box cover of Troyes, ©Pearl Games.

Until Agincourt, Henry had pursued the limited military goal of reacquiring the Normandy into the Kingdom of England. As Edward before him, success begot more desires. Henry struck an alliance with the duke of Burgundy with the goal of pressing the English claim on the Kingdom of France. As support for the king Charles VI of France had faltered after Agincourt, that seemed within reach. And so on May 21, 1420, the two monarchs agreed on the Treaty of Troyes, in which Charles VI named Henry V the heir to the Kingdom of France, disinheriting his own son, the dauphin Charles. Henry married Charles VI’s daughter Catherine. Their son Henry would be undisputed ruler of France.
Or would he? Henry V died in 1422, only 35 years old. Less than two months later, Charles VI died as well. Now Henry’s son, Henry VI, would inherit the Kingdom of France. But Henry VI was an infant, not yet a year old. For the time being, he would have to leave any kind of ruling to his lieutenants – provided, of course, that they would not fall out with one another. Henry V’s early death – without which the two most powerful monarchies of western Europe might have merged – provides one of the great „What if…“ moments of medieval history. 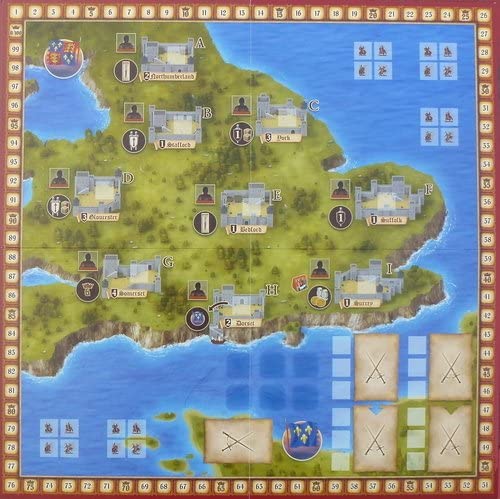 Battles in France, counties in England: You want both! Map board of Lancaster, ©Queen Games.

The brittle domestic peace in England forms an important theme of Lancaster (Matthias Cramer, Queen Games). Players are the heads of English noble houses. They can contribute knights to the campaign in France which is semi-cooperative – if not enough players support the king here, there will be no rewards, but each player wants to take the lead in the battles and gain most of the glory. Back in England, however, there is no cooperation at all. Instead, a vicious free-for-all over the control of counties ominously foreshadows the internal strife to come in England once Henry V was dead.

The Virgin Warrior: Joan of Arc and the Rebirth of France

England was still on the offensive, but there were no more quick victories in the style of Agincourt to be had. Instead, slow sieges dominated – the most important one at Orléans. In 1429, one of the more unlikely protagonists of history made her appearance there.
Joan of Arc was the daughter of peasants. She believed to have visions of saints and archangels urging her to come to the aid of France and its beleaguered rightful ruler, the dauphin Charles. After convincing a local noble of her divine mission, he sent her to Chinon where Charles held court. Not much had gone right for Charles since his father had disinherited him. The Kingdom of France was challenged by England, Burgundy, and some other nominal vassals. Charles was hungry for any spark of hope. Joan would give him just that. Charles sent her to offer her divine counsel to the besieged city of Orléans.
The chaotic multipolarity of France in the 1420s is captured in Joan of Arc (Pascal Bernard, Tilsit). Up to six players vie for influence in France. As that is determined by control of towns, sieges are the most important kind of battles – just like Crécy or Agincourt could not end the war in the favor of England.

There is no way a game about Joan of Arc could have anything but a heroic charge on the cover. Image ©Tilsit.

Joan’s short tenure with the French army at Orléans was wildly successful. The morale of the defenders improved, and in a series of daring sorties they drove the English forces off. Joan then convinced the dauphin to march for Reims, the traditional coronation city of France, and be crowned and consecrated king.
Charles, now as Charles VII king of France, would continue to succeed. Joan, however, was captured by the Burgundians the following year. She was tried for heresy, unsurprisingly found guilty by an English-Burgundian jury which aimed to stain Charles’s rule, and burned at the stake.
Joan understood herself to be a messenger between the natural and supernatural worlds. If you are interested in the latter part, maybe Time of Legends: Joan of Arc (Pascal Bernard, Mythic Games) is up your alley – a miniatures battle game that does not only features archers and knights, but also angels and dragons.

Tarasque miniature. ©Mythic Games.
Joan was dead, but she had turned the tide of the war. As English internal dissent increased, the French slowly retook city after city, county after county. Twenty years after Joan’s death, Charles VII even conquered Gascony, which had been English before 1337. As the Hundred Years‘ War was concluded in 1453, the last English possession on the European mainland was the city of Calais.