2020 is the year in which we all suddenly discuss hygiene measures and infection rates. Medical workers are recognized as the essential pillars of our society that they are (although much of it is performative, and working conditions in care do not reflect the crucial role of the field). One particular pioneer of our medical system was born 200 years ago, and she made major contributions to all the areas mentioned – hygiene, statistics, and nursing. And thus, it is doubly fitting to dedicate this post to Florence Nightingale, from her early struggle to become a nurse over her sudden fame as a nurse in the Crimean War to her contributions to sanitation, statistics, social reform and nursing instruction – and, at times, to discuss the board games in which she features and the limits of biographies via board games.

The Girl in Search of a Purpose

Florence Nightingale was born on May 12, 1820. The circumstances of her birth are telling: Her parents were avid travellers – rich enough to afford it, curious enough to desire it, idle enough to find time for it. And there sense of humor was odd enough to name their daughter after her Italian birth town. (In fact, her parents pulled that off twice, having named Florence’s older sister Parthenope after a Greek name for Naples, where she’d been born in 1819.) Her father took his daughters‘ schooling into his own hands, and thus she received a broad education in languages, mathematics, and philosophy. As Nightingale grew older, she felt more and more constrained by societal expectations to dedicate herself to ladylike leisure activities. This led to tensions between her and her parents and sister.
Nightingale shortly broke out of her idle life when a flu epidemic ravaged England in 1837. The 16-year old Nightingale was not infected and helped tending to the sick for several weeks. At the end of this early nursing experience, she claimed to have heard God calling her to serve him – which kind of service, however, she did not know yet. Only several years later, after having received encouragement from the American doctor Samuel Gridley Howe, did she resolve that she wanted to be a nurse.
To wish that was scandalous for an upper-class lady like Nightingale. At that time, nurses had no medical training. Nursing in England was little more than seeing to patients‘ most basic needs, so those who did it were simple servants from the lowest strata of society. Consequently, the tensions between her and her family sharpened. 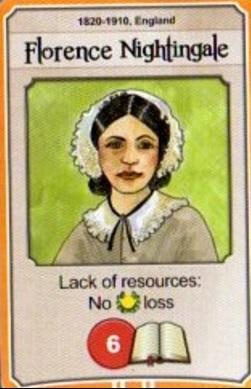 As Nightingale’s mental health deteriorated, her parents allowed her to take more trips through Europe and even farther to Egypt, accompanying their friends Selina and Charles Bracebridge. Nightingale made sure to visit hospitals while travelling, and on the way home to England she managed (supported by Selina, a staunch advocate for women’s independence) to change the itinerary so that in 1850 they visited the Kaiserswerther Diakonie, a German hospital run by deaconesses under the training of a Protestant pastor. A year later, Parthenope was sent to a spa in Bohemia, and Florence Nightingale pleaded to accompany her – but only to Kaiserswerth, where she would train as a nurse. The Nightingale parents gave in. If Parthenope could do what was good for her physical health, Florence was allowed to do what would help her mental health. After her training at Kaiserswerth, Nightingale’s father granted her an annual allowance of 500 pounds, so that she could live independently. She then took over the Institute for the Care of Sick Gentlewomen, a small nursing home in London in 1853. This kind of private care seems to be hinted at by Nightingale’s representation in Nations (Rustan Håkansson/Nina Håkansson/Einar Rosén/Robert Rosén, Lautapelit.fi) – even if the player (the eponymous “nation” does not have any resources, they don’t lose VP (as Nightingale’s nursing presumably deflects damage to the people).

The Lady with the Lamp

Nightingale’s new task at the Institute coincided with the outbreak of the Crimean War. Britain and France supported the Ottoman Empire against Russian expansion. British wounded soldiers were brought from the battlefields on the Crimea to military hospitals in Istanbul. The conditions in these hospitals were not worse than in previous conflicts – a somewhat cavalier attitude to medical support had been characteristic of the British Army of Waterloo as well – but the Crimean War was the first to be covered by telegraphed records by the newspaper correspondents. Thus, the British public knew soon that more soldiers died of diseases contracted in hospitals than from battlefield wounds.
The new times required new approaches, thought Sidney Herbert, the Secretary of State for War. And he remembered a promising young lady and family friend who was now heading a nursing home. Herbert asked Nightingale to bring a team of nurses to Istanbul and establish a new hospital there. Nightingale enthusiastically agreed and left for Istanbul in October 1854.
Nightingale as the head of a team of forty nurses – hand-picked by her on the basis of their qualification and character – was mainly concerned with organizational tasks. An entirely new hospital which was soon to tend to hundreds of wounded soldiers had be established from the ground. Nightingale did not limit the care for her patients to the medical necessities, though. She was intensely engaged with improving their wellbeing by providing leisure activities with items like books, balls, or writing material or by ensuring that they could reliably send a part of their pay home. Despite the administrative nature of Nightingale’s work, the attachment of her patients led to her being remembered as some kind of angel of personal care – the „Lady with the Lamp“, going from bed to bed at night to personally check on her patients.

The Lady with the Lamp in World Changers (art by Alba Ballesta González).

It still is the most famous way of remembering her, and is thus used in her character card in the upcoming World Changers (THEKI, Korea Board Games, to be released in the fourth quarter of 2020). [Full disclosure: I was involved with historical consultancy/writing in regards to the characters in World Changers.] The card effect – other characters who end up with the player who has the Nightingale card are returned, unless expressly invited – is also reminiscent of nursing: Nightingale met lots of people who would have preferred not to be in that predicament – her patients – who after the acquaintance and their reconvalescence left her hospital again.
The „Lady with the Lamp“ soon became famous, thanks to the correspondent reports which had been so crucial in her being entrusted with her task in the first place. They styled her into an icon of Christian womanhood. That did not only vastly improve the public image of nurses, but also of the common soldiers: Before, the British public had eyed them with suspicion and regarded them as violent scum. Now, they turned into fellow human beings with human afflictions and needs in their eyes.
The immense popularity which Nightingale enjoyed also set her apart from her competitor Mary Stanley, who had been tasked to set up a similar hospital soon after Nightingale. Both hospitals saw a sharp drop in mortality, but Nightingale is a household name until today, whereas Stanley (with whom Nightingale famously clashed) is all but forgotten.

The Reformer and Instructor

When Nightingale returned from Istanbul, she was asked to work on a report on the nursing there which would turn into an analysis of the British military medical system. The report recommended to improve the sanitary installations of barracks and thus effected a markedly decreased mortality among soldiers.
At this point, Nightingale already suffered from health problems due to several diseases she had contracted during the Crimean War. She was thus unable to travel, which forced her to work without visiting the barracks, hospitals, or poor houses which she aimed to improve. Nightingale developed standardized forms to collect the data, and found innovative ways to visualize it, like the polar area pie chart which she used to showcase cyclical phenomena.

Polar area pie chart from Nightingale’s report on the British army in the east for two years (April 1854 to March 1855 to the right, April 1855 to March 1856 to the left). Different causes of death are differently colored. The spike of mortality after the battle of Inkerman (November 1854) is visible, as is the drop from summer 1855 on.

Nightingale did not limit her scholarly work to Britain. From the late 1850s on, she got involved in Indian affairs. First, it was the tried-and-tested work of improving the health of soldiers. Once more, changes to sanitation in the barracks massively decreased mortality. Then she began founding hospitals for Indian civilians which would exclusively treat women and would be run by women as well. Finally, Nightingale went beyond the confines of medicine and made suggestions based on her analysis of Indian agriculture how to avoid famines (some of the irrigation projects the suggested would later make harvests more bountiful and reliable) and advocated for the rights of Indian land tenants.
Maybe most importantly, Nightingale turned nursing into a profession when she founded the Nightingale School of Nursing in 1860. The school taught women from all strata of society the practical skills of nursing. That marked a distinct alternative to the previous situation in Britain (where care workers had been unskilled) and on the Continent (where the model of the nurse motivated by faith and charity remained dominant). Nightingale also wrote the foundational „Notes on Nursing“ “ for individuals nursing family members. The short book, written in a very simple writing style, was accessible to the broadest audience imaginable.
From the 1890s on, Nightingale’s vision and memory began to falter. She retreated from the public for the last decades of her life and died on August 13, 1910.

Board Games and Biography

I’ve written a few of these „biographies by board game“ already (most recently Winston Churchill, last year Napoleon Bonaparte (Part 1 and Part 2), and in 2018/19 a double biography of Hannibal and Scipio Africanus (Part 1 and Part 2)). I was reluctant to write one of Florence Nightingale – not because she’s less interesting or less important, but because there are far fewer board games in which she plays a role. Some of that can be attributed to the fact that most board games that take their history seriously focus on statecraft and warmaking, and thus we are left with games about political and military leaders.
There are three kinds of games in which an individual person from history might feature:
Both the games cited are in the most cursory category as they reference the entirety of Nightingale‘s life on one card.
The opposite would be full games dedicated to one person – that’s usually only possible if they have spent most of their life in one pursuit (say, the conquest of Persia, like in Field Commander: Alexander (Dan Verssen, Dan Verssen Games)), or if you use some workaround (like Luther’s disciples writing a biography of him after his death in Luther: Das Kartenspiel (Domonkos Bence, Ninirc Games)). For Florence Nightingale with her three distinct phases in life that seems tough to do.
That leaves us with middle-range games – games dedicated to a phase of or a particular exploit in a person’s life. As to my knowledge, there is not one of those about Florence Nightingale. I do understand why people might want to avoid the later part of her life spent with reform proposals (although there could be a political game in that) and data analysis (to be fair, I’ve seen eurogames with even drier themes). However, the first 35 years of her life seem ripe with ideas – what about a game about her travels and the struggle with her parents to follow her own path? Or about running competing hospitals in the Crimean War (like Nightingale and Mary Stanley did)? There is still much to design.

4 thoughts on “The Life & Games of Florence Nightingale”