One hundred years ago, World War I came to a close. It had been unlike any other war before, and it thoroughly smashed the imperial order of the 19th century. Now that might not have been overly surprising for a monarchy like the Ottoman Empire, the “Sick Man of Europe”, or Austria-Hungary with her ten major ethnic groups looking for self-determination in this age of overflowing nationalism. Even the immense Russian Empire was a giant on feet of clay with its numerous political, social, and economic contradictions. But the German Kaiserreich? Before World War I, it was the most powerful country in Europe, and ever growing more powerful. And yet, the Kaiserreich was swept out as well and replaced by the first German republic. Let’s have a look at this extraordinary story. First, we’ll go into the military situation by the end of 1918. Then we’ll move on to the surprising November Revolution, and finally go into the atrocities of 1918/19.

Defeat and Desertion: The German Military at the End of the War

Four years of fighting had already passed by 1918. The material superiority of the Allies became ever harder to bear for the weary German army. In spring 1918, de facto military dictator Erich Ludendorff dared one last gamble: If he could knock out the allies with a major offensive on the Western front before American troops would arrive by the masses, Germany might still win. 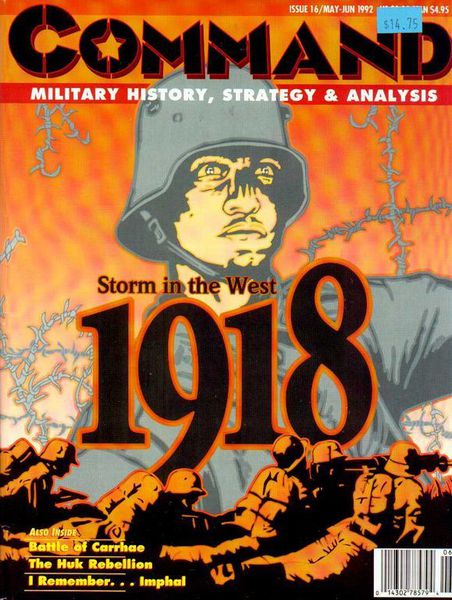 Germany’s last offensive is the topic of 1918: Storm in the West.

Ludendorff’s gamble failed. By August, the Allies had not only contained the German thrust, but were themselves advancing and breaking through the German front. A military victory seemed impossible now. Only a negotiated peace could offer Germany a way out. Ludendorff, however, wanted nothing to do with that. Anything less than victory would be dishonorable for the German army, so he preferred that others would have to wear that stain. Ludendorff resigned and pressed for a parliamentary government (complying with US president Wilson’s outline for a post-war order) to clean up after him. While the government was nominally still headed by the aristocrat Prince Max von Baden, the actual power brokers were the Social Democrats as the strongest party in parliament, especially their leaders Friedrich Ebert and Philipp Scheidemann.

A Revolution for the Government: From Kiel to Berlin

Not all military men were ready to give in like that. Some still placed hope in a military solution to improve Germany’s position and uphold the will of the Germans to fight – and, above all, allow the military to go out in a blaze of glory instead of an ignominious retreat. The ideas went so far to include a suicidal cavalry charge on the Western Front, led by the Kaiser himself. But no military victory could come from that. Only the navy could still provide a quick and decisive success. As the navy had not gotten the chance to prove their worth during the war (being blockaded by the superior British Royal Navy), the admirals were especially eager to carry out the blow. They concocted a plan to sail forth the entire navy aiming at London – without ever consulting their new civilian government about that.
Their sailors, of course, got wind of the plan. And they were not willing anymore to go on a suicide mission for the glory of their commanders – especially as most of them supported the new Social Democratic government. Some sailors at the main naval base in Kiel were arrested for mutiny when they refused to prepare their ships for the big attack. The others demanded their immediate release. When soldiers shot into the crowd of protesting sailors, the revolution began. The sailors took over Kiel in no time at all. Troops sent to put them down joined the cause of the revolution. It spread from city to city over the north of Germany like a wildfire and reached the capital Berlin. Neither the civilian government nor the military headquarters with the Kaiser could keep up with the speed of events. On November 9, Max von Baden desperately announced the abdication of the Kaiser without consulting him (to save monarchy as such) and the Kaiser fled to the neutral Netherlands. On the same day, however, Philipp Scheidemann proclaimed the republic in Berlin. Just hours later, Karl Liebknecht, the leader of the leftist Spartacus League, declared Germany to become a socialist republic after the Russian model.
Although almost all of the revolutionary sailors, soldiers, and workers were Social Democrats (be that of the main Social Democratic Party or the Independent Social Democratic Party which had opposed the war), the Social Democratic leadership remained skeptical of the revolution – especially the new chancellor Friedrich Ebert, who would have preferred Germany to become a constitutional monarchy. For the time being, the Social Democrats kept an uneasy alliance with the Independent Social Democrats, and the Workers’ and Soldiers’ Councils which had assumed local power everywhere in Germany during the revolution. Ebert, however, looked for other allies. He found them in the army leadership under general Wilhelm Groener, who was ready to support the Social Democratic government against the Workers’ and Soldiers’ Councils.

In December, Ebert and the army made their first move to unseat the Congress of the Workers’ and Soldiers’ Councils. However, the troops sent to Berlin for that matter were not as loyal to the government as Ebert might have hoped. Many of the soldiers just wanted to be home for Christmas and had no interest in taking any further part in fighting. Others sprung to action too early, so the strike against the Congress failed. Ebert and the army managed – with the support of the press from Social Democratic to right-wing national newspapers – to lay blame for the fighting on Liebknecht’s Spartacus League. On Christmas, the People’s Navy Division in Berlin broke with the government over matters of command of the division and withheld pay. Ebert sent an elite Guard Division against them which was repelled. The People’s Navy Division – unconcerned with the larger political situation – did not capitalize on their success, but just kept demanding to have a say in choosing their commanders and be paid.
In January, mass protests erupted over the killings of some activists of the Councils. The Spartacus League concluded that the masses were ready now for the socialist revolution. They were not, and the horrible military leadership of the Spartacists doomed their uprising from the beginning. It fell apart after only a few days under the artillery shells of the military. Great War-style fighting had now come to downtown Berlin. Liebknecht and his fellow Spartacist leader Rosa Luxemburg were captured by soldiers of the irregular, right-wing Freikorps whose founding the government and army had supported. Both of them were murdered. From March to May, further uprisings, strikes, and council-based governments in German cities were put down by the might of the army and the Freikorps.

By the time of these altercations, the National Assembly which was to give the new German republic its constitution had already moved away from volatile Berlin and instead settled in quiet, provincial Weimar. The Weimar Republic, as it came to be known, was, as we’ve seen, founded on violence – symbolic violence the government carried out to show who was in charge. During the early 1920s, various violent uprisings – like the right-wing Kapp Putsch and Beer Hall Putsch or the left-wing Ruhr Red Army uprising were also put down by government forces (and, in case of the right-wing putsches, by workers’ strikes and combat units). The violence used to found the republic came to haunt it in its last days: The Weimar Republic crumbled under the riots of the 1930s which gave way to Nazi rule.
Sadly, there are no board games yet (that I am aware of) which deal with the tumultuous time in German history in 1918 and 1919. As other conflicts of that period – like the Finnish Civil War or the Estonian War of Independence – have recently gained gaming attention, I’m optimistic the same will happen for the German revolution of 1918/19.

Edit: Chris over from Tactical Practical is working right now on a German revolution game! I had seen his earlier development posts (and subconsciously plagiarized the original title of this post from him), but could not find them anymore on his website. Some more search, however, produced all of his development posts. I recommend you check them out – it’s a fascinating view not only on a possible German revolution game, but also into the process of game design when everything is still in flux.

If you read German, I recommend the well-written Haffner, Sebastian: Die verratene Revolution, Scherz, Bern 1969.
For the role of violence in the revolution and for the Weimar Republic, see Jones, Mark: Founding Weimar. Violence and the German Revolution of 1918—1919, Cambridge University Press, Cambridge 2016.